Are you looking for a way to express your tireless commitment to a project? This post unpacks the meaning and origin of the proverb, “no rest for the wicked.”

The proverb’s meaning, “no rest for the wicked,” changed over the centuries. Originally, the biblical saying meant that people possessed by an evil spirit (or a criminal) would not rest in a calm state; they are always looking to get up to no good.

However, the phrase’s meaning changed as we moved into a secular society. As a result, the more common sense of the words today is to show someone you’re unrelenting commitment to a project or task.

For instance, if you’re up late working for a few nights in a row, your partner might comment on your behavior. You would reply with “no rest for the wicked,” to show them that you are committed to spending as much time on your work as possible.

“The boss has me working overtime every night this week so we can catch up on production. I don’t know how he expects me to keep this up. Oh well, no rest for the wicked, I suppose.”

“The crime rate continues to soar due to poverty levels reaching all-time highs in the country. It seems like there is no rest for the wicked as burglaries and carjackings are up over 20% year to date.”

“I’ve got to make sure I make this happen, even if I have to commit every waking minute of my life to it. No rest for the wicked; I’ll get there faster than anyone else.” 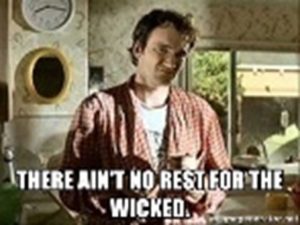 The phrase appears many times throughout recorded history in its proverbial biblical context. The term would carry over into secular society in the 1930s, and the meaning changed from describing the wicked actions of others to putting in a relentless effort to a task.

Harold Gray used the expression in 1933 as the title for a cartoon strip, “Little Orphan Annie.”

Phrases Similar to No Rest for the Wicked

Phrases Opposite to No Rest for the Wicked

Ways People May Say No Rest for the Wicked Incorrectly

Some people may use the phrase with the more traditional meaning of the expression. They may use it to describe the wicked actions of others. For instance. If someone breaks into your car, and it’s happening more frequently around your neighborhood, a friend might say, the crime rate is picking up.

You could reply with, “you know what they say, no rest for the wicked.” While it’s technically the more correct version of the saying, most people use it to describe their extended productivity habits in modern language.

Acceptable Ways to Phrase No Rest for the Wicked

You can use the saying “no rest for the wicked” in several scenarios. The most common expression in colloquial language is to tell people that you’re expending effort. It’s a way to get people to acknowledge the effort you’re playing in something.

For instance, a friend could ask you about your plans for the night. You tell them that you have to work a double shift. When they tell you that’s brutal, you reply with, “well, no rest for the wicked, gotta make that dollar.”