Are you looking for a way to tell someone that they display their father’s behavior and characteristics? You could say, “like father, like son.” This post unpacks the meaning and origin of this expression.

The expression “like father, like son” refers to a child emulating their father’s behavior. The phrase can have a positive or negative connotation, depending on the context of the situation.

It’s a way of telling someone that you can’t escape your genetics and that we all follow in our father’s footsteps. It’s a natural instinct, and we can’t help this behavior.

You could use the phrase to describe your child’s behavior or another parent’s kids’ actions and words. It also acts as a reference to let the child know that they need to start thinking independently.

“I heard that Mike got arrested on drugs charges last night. His dad was an addict too, and I think he died in jail. Oh well, Like father, like son, I guess.”

“Adam ended up being a finance titan, and he owns a firm downtown. His father was a big Wall Street guy, so, like father, like son, I suppose.”

“Look at how Dennis treats women; he’s despicable. I heard his father was a womanizer too, so, like father, like son.”

“I swear, Tim is the mirror image of his dad; he emulates everything he does. Like father, like son, let’s hope he grows up to be the man his father is and not a disappointment.

“I can’t believe he did that to me. Like father, like son, he dad’s a dirtbag too.” 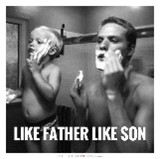 The origin of the expression “like father, like son” comes from a biblical proverb. The saying appears in the book of Ezekiel 16:44 as the following.

“Behold, every one that useth proverbs shall use this proverb against thee, saying, As is the mother, so is the daughter.”

The first written record of the saying comes from the collection of favorite proverbs “Bibliotheca Scholastica Instructissima,” compiled by Thomas Draxe, published in 1616.

Some people may use the phrase “like father like son” to describe interactions between people with no relationship to each other.

You can use the phrase “like father like son” when telling someone you know that they behave like their father. Or they bare similar traits and characteristics in their behavior that emulates their father.

It’s a way of telling someone that they are unable to pull away from their genetics and the preprogramming we all receive at birth through our genetics.

It’s also a way of describing a son’s behavior emulating their father. The term can have positive and negative connotations. This phrase is suitable for social use, but you won’t hear it in professional conversation.