Are you looking for a motivating statement to say to your friend when things get intense during your workout? You could tell them “no pain, no gain” when they feel like giving up. This post unpacks the meaning and origin of this expression.

The expression “no pain, no gain” means that you need to work hard in life to achieve your goals. It’s a way of telling someone that they need to suffer to succeed and that nothing comes easy in life. To achieve anything of worth in life, you need to sacrifice, which comes through pain and struggle.

It’s a common saying in the fitness industry. There are thousands of memes expressing this saying in a fitness context. However, it applies to many different situations in life, from your health to your career and your mental state.

“I’ve been beating myself down with training six days a week for the last two months. Well, I guess it’s true what they say; no pain, no gain.”

“This marathon is a real challenge. I feel like I want to give up, but no pain, no gain.”

“Melissa’s studying for her SATs right now; the girl is going six hours a night. No pain, no gain, I bet she ends up making it.”

“No pain, no gain, boys, let’s make it happen and move that boat into the water. I don’t care if you haven’t slept yet.” 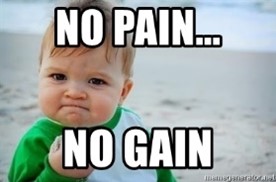 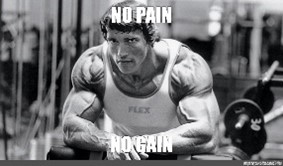 The origin of the expression “no pain, no gain” comes from the 2nd century. The first known version of the saying comes from a Rabbi’s writings in “The Ethics of the Fathers,” where it appears like the following.

“According to the pain is the gain.”

Robert Herrick used the proverb in his poem “Hesperides,” published in 1650, where it appears as follows.

“No Pains, No Gains.

If little labor, little are our gains:

Man’s fate is according to his pains.”

John Rays wrote “Without pains, no gains,” a collection of proverbs published in 1650. The great Benjamin Franklin used the saying in his novel, “The Way to Wealth,” published in 1758, where it appears as follows.

“There are no gains without pains.”

However, the legendary Jane Fonda coined the modern use of the phrase and its use in the fitness industry. Some of her infamous catchphrases in her TV series workouts were “no pain, no gain” and “feel the burn.”

Phrases Similar to No Pain No Gain

Phrases Opposite to No Pain No Gain

Ways People May Say No Pain No Gain Incorrectly

Some people may use “no pain, no gain” incorrectly. The “pain” in the expression is not always the feeling of pain or a physical sensation.

It can have a mental application, describing the will in a person’s character and drive to succeed. Using it to describe the act of torturing somebody would be the incorrect use of the expression.

Acceptable Ways to Phrase No Pain No Gain

You can use the expression “no pain no gain” in social and professional settings. You could use it at the gym to motivate your friend into completing that last rep on the bench press. Or you could use it at work to describe working long hours in quest of a promotion or reward.

The saying describes taking joy from overcoming struggles in life. You can use it to describe mental and physical challenges that test your mettle and character.