Are you looking for a way to describe a short workday? If so, you could say that you’re working “bankers hours.” This post unpacks the origin and meaning of this expression.

The meaning of the expression “bankers hours” is short working hours. For instance, you start at 9 am and finish at 3 pm, which is the typical operating hours of a bank.

The phrase describes a workday that starts late and ends early, giving you more time in the evening and afternoon to enjoy your after-work activities or hang out with friends and family.

When people talk about banker hours, they’re referring to a lifestyle of working less than 25-hours a week. Some people may use the expression to refer to people taking a half-day from work or working on a contract where they only come into the office for a few hours each day.

“I got a new sales job and its shift-work. We only have to go into the office for five hours a day, and I feel like I’m working bankers hours.”

“Jim is working bankers hours today; he has a doctor’s appointment to remove his cast at 3pm this afternoon.”

“I wish I had a job where I could work bankers’ hours. Right now, I’m working 9/9/6, and it’s killing my energy and mental health.”

“Does the sales department ever do any work? I never see them in the office; it’s like they’re working bankers hours.”

“I’m envious of those professionals that get to work bankers hours while we slave away nine to five.” 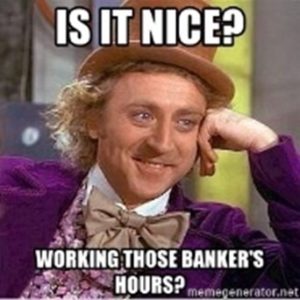 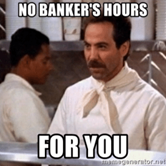 The origin of “bankers hours” comes from the banking industry. From the 1800s to the late 1900s, banks would open to the public from 10 am to 3 pm. Banks would open late and close early to balance the daily transactions in time to allow employees to go home at 5 pm.

However, times changed as the financial system went digital. Banks now extend hours up to 4 pm, with some opening as early as 9 am. The phrase moved into the social culture, describing any job requiring minimal hours a week.

By the 1980s, it was common for people to work a “9 to 5” job entailing 40-hours a week. “bankers hours” would refer to jobs requiring 25-hours or less a week. The phrase is still common in modern language, and you probably hear it from time to time or use it yourself.

Phrases Opposite to Bankers Hours

Some people may use the expression to refer to working in a bank. While it’s the technically correct use of the term, it’s not the proper use of the phrase. Bankers’ hours describe the actions of going into work late and leaving early or working less than 25-hours a week.

You can use the phrase “bankers hours” when you’re trying to describe a short workday or an easy job with light hours. For instance, if you land a sales job and the hours are from 11am to 3pm every day, you could say that you’re working “bankers hours.”

The phrase suits professional and social use. For instance, if you ask the boss to go home early, they could reply and ask you if you think you’re working bankers hours before denying your request. At home, you could tell your partner that you have an easy work week ahead, and you’ll be working bankers hours.