Are you telling your friend that you need help with something, and they reply with “say less?” What do they mean? Are they asking you to stop talking, or do they mean they will help?

This post unpacks everything you need to know about the meaning, origin, and use of this phrase in conversation.

The phrase “say less” means that you understand what the other person is saying, and there is no more need for explanation. It also serves as a confirmation statement to let the other person know that you are up for a task they want you to participate in.

“Say less” is a way of telling someone that you see eye-to-eye with them. You can use it when talking to people face-to-face and participating in online chatrooms and message boards like 4Chan and Reddit.

The most common use of the phrase is to let people know you agree, but some people might use it to tell people to “shut up.” This use is less common, and most people use the phrase to indicate their approval rather than as a negative connotation.

Maggie: “I’m thinking about going to the club tonight; my favorite band is playing.”

Boss: “I’m worried about this project. We need to ensure it’s everything the client wants, or we’ll lose the contract.”

You: “Say less, boss, we’re on it right now, and we’ll have the results by the end of the day.”

You: “I need some help moving house this weekend, I know you’re probably busy, but could you spare an hour or so to help me with the heavy stuff?” 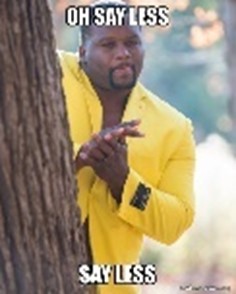 “say less” is a modern shortening of the saying “say no more.” However, the original expression is somewhat outdated and doesn’t fit into the contemporary vernacular. As a result, people started shortening the phrase to make it more palatable in conversation.

The phrase holds the exact same meaning as the original saying but with fewer letters. Experts attribute the expression to the rise of texting culture, which saw the reduction of many popular saying into abbreviations or shorter versions of the original phrases and words.

The phrase became popular as a confirmation statement on social streaming platforms like Twitch and became the subject of thousands of memes. Today, you’re likely to have someone reply to a comment or question you make with a meme or GIF involving the words “say less.”

Phrases Opposite to Say Less

Some people may use the phrase to tell another person to “shut up” because you can’t stand what they are saying to you or other people in the chat. However, this phrase is more suitable for agreeing with others, not causing conflict.

You can use the phrase “say less” in online chatrooms, forums, message boards, and streaming chats. You’ll be using the term to tell someone you understand what they are talking about and fundamentally agree with what they have to say. It’s another way of confirming your alignment to a person’s principles, thoughts, or actions.