Did someone tell you that you need to apply a “rule of thumb” to a task? What do they mean? Are they asking you to use your thumbs? This post unpacks everything you need to know about the meaning and origin of this expression.

The “rule of thumb” is an idiomatic expression referring to a set of general rules with no written formulation. It’s a way of calculating an approximate distance, length, method, task, or protocol based on your practical experience with the job, rather than relying on theory.

“As a general rule of thumb, we always calculate the client’s expenses before looking into their income for the month. That way, we can get a better understanding of where they need to cut back in their monthly expenditure.”

“I don’t know how to line it up properly, but a general rule of thumb is to raise it to eye-level before driving hoe the fastener.”

“We don’t always do things that way, it’s just a general rule of thumb, and you can set it up any way you want.”

“Everyone knows that the general rule of thumb is to avoid the first three calls of the day; they are always salespeople looking to offer you a product or service. 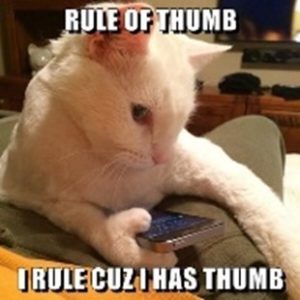 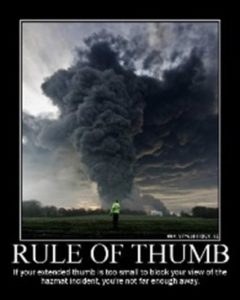 The origin of the saying “rule of thumb” is unclear. Some language experts think the phrase comes from English common law, describing the width of a stick (thumb-width) suitable for a man to beat his wife. However, the reality is that this law never existed, and it’s not the origin of the saying.

While the “rule of thumb” pertaining to wife-beating was not part of English common law, it was a rumored statement from the 18th-century judge Sir Francis Buller. Buller supposedly claimed that a man could beat his wife, provided he used a stick no wider than his thumb.

While there are plenty of references to this statement, there is no evidence suggesting that Buller ever said the phrase.

The earliest appearance of the phrase in English literature appears in 1685, in a collection of sermons by Scottish preacher James Durham, published after his passing.

The text reads as follows.

“Many profest Christians are like to foolish builders, who build by guess, and by rule of thumb (as we use to speak), and not by Square and Rule.”

We can also find the phrase in the works of Sir William Hope, namely in “The Compleat Fencing Master,” published in 1692, with the following.

“What he doth, he doth by rule of thumb, and not by Art.”

The Complete Collection of Scottish Proverbs by James Kelly, published in 1721, has the following text.

Phrases Similar to Rule of Thumb

Phrases Opposite to Rule of Thumb

Some people may use the phrase to describe beating their wife or partner. While there is some connection to this in the origins of the saying, it’s not the correct use of the phrase. “Rule of thumb” doesn’t have any reference to a ruler or your thumb; it’s a way of telling people an approximate estimation.

You can use the phrase “rule of thumb” when you’re telling people general guidelines for activities and events. You can use the term at home or work to describe an approximate method for doing an activity that doesn’t require precision or accuracy.