Are you playing a game online? If someone types “Shippuden” into the chat, what do they mean? This post unpacks everything you need to know about the meaning and origin of this expression.

The word “Shippuden” has Japanese origins, and it’s the name of a popular manga series from the 2007 to 2017 era. Shippuden is a combination of two Japanese words, shippu and den.

“Shippu” functions as a noun, and the direct translation of the word is “strong, swift wind.” The noun “Den” translates to “legend.” The term “legend,” in this case, could mean “legacy,” but it also refers to someone being a “legend.”

So, the combination of the two words translates to “legend of the swift, strong wind.” Another way of saying this phrase in English would be, “hurricane chronicle.”

“Shippu” appears as the Japanese character (kanji), expressed as 疾風 in written format. The first of the characters translates to “rapid” The second 風, means “wind.”

When you’re using the word Shippuden online in chats and message boards, you’re usually referring to the amine series “Naruto: Shippuden.” The phrase is common on chatrooms and message boards discussing manga, and it can also be a reference to calling someone “legendary” or “a class act.”

For instance, if you’re playing a game online, and someone completes an impressive maneuver or tactic, you could type Shippuden in the chat, informing them that you think their actions are legendary.

“Look at that guy streaking across the field at half time; what a Shippuden.”

“Jon Jones is the true Shippuden of the UFC lightweight division, not Daniel Cormier.”

“That guy is a real Shippuden; he’s a force to be reckoned with, alright.”

“I’m going home to watch the rest of Shippuden; I love that anime series.” 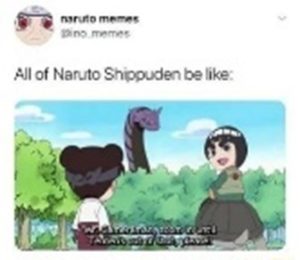 The saying “Shippuden” originates from the anime series “Naruto: Shippuden.” The anime series is an adaptation of Part II of the original manga series by Masashi Kishimoto, featuring over 500-episodes.

The series follows the adventures of Naruto Uzumaki, a teenage ninja. Hayato Date created the series, with TV Tokyo and Pierrot producing it. The series started broadcasting on TV in 2007, and it was a smashing success with anime fans. The series ran for a decade, with the final episode airing in 2017.

The series has one of the most successful runs for an anime in history, and many refer to it as a legendary manga, which is where we get the meaning of the phrase when used in conversation and chat.

The phrase started appearing in online discussion boards talking about the series and other anime projects. Many people would use it to reference the show rather than typing out the full title and making a spelling error.

Phrases Opposite to Shippuden

Some people may use the word “Shippuden” in everyday conversation. However, the word is only popular in anime circles, and people with no interest or knowledge of anime may not understand the meaning of the word. Typically, the phrase suits use online more than in face-to-face conversation.

You can use the word “Shippuden” in online chat rooms and forums where you’re making anime references. Twitch and Reddit are a few examples of sites where anime is a frequent topic of discussion. People may post the word or memes featuring the word when they are trying to tell you that they approve of what you’re saying or your actions.