Did someone just type “Boku no Pico” in the chat in reference to an anime they recently watched? If that’s the case, you might want to avoid streaming that title. This post unpacks everything you need to know about the origin and meaning of this idiomatic expression.

The anime slang phrase, “Boku No Pico,” refers to witnessing horrendous content or events. The content is so disgusting that you could end up having nightmares about it. The original use of the phrase described an anime series, but the term spread to describe any horrific situation or event in life.

The term evolved to describe more than underage porn-themed anime content over the years. For example, if you watch a decapitation video, you’re likely to find it chilling and horrific. If you want your friends to avoid the experience, you will describe the video as “Boku no Pico.”

User 2: Yeah, I’ve heard bad things about it; many people wanted to throw up after watching it.

User 1: I’m one of those people; it was absolutely horrific.

Using Boku no Pico in conversation:

Chat 1: That anime was shocking, I don’t know what to say? 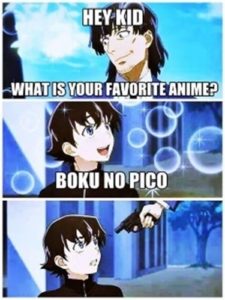 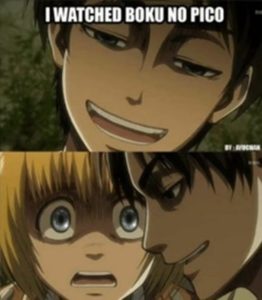 People interested in anime culture would begin to use the term “Boku no Pico” to describe horrific situations in the real world and online. You’ll find the use of the phrase most common in online streaming chats on Twitch and in Anime-based forums and message boards.

Phrases Similar to Boku no Pico

Phrases Opposite to Boku no Pico

“Boku no Pico” is a phrase describing something horrific or deeply shocking. As a result, you wouldn’t use it to discuss pleasing situations or online content. You wouldn’t use it in formal conversations or with people who don’t understand anime culture.

You can use the phrase “Boku no Pico” when you’re trying to describe a horrific scene or situation to another person that understands anime culture. The term can describe anime events and real-world events as shocking or horrifying. It also features in both online and physical engagements.