Are you looking for a way to describe collaborating with someone on a project? If so, you could say that you are working “in tandem” with them. This post unpacks the meaning and origin of this expression.

The expression “in tandem” means that you are doing something with someone else. For instance, when you learn to skydive, you will go up with an instructor for a “tandem” jump. You strap into the instructor’s harness, and they control the parachute during the jump.

The phrase originally described the practice of harnessing two horses side-by-side with each other when pulling a carriage. However, the invention of the automobile saw horses fall away as a primary mode of transport.

“We often pilot projects in tandem with the local startup incubators around San Francisco. It gives us a deep talent pool for developers.”

“The actor works in tandem with the director to ensure that they get the right feel for the scene before they start the shoot.”

“The swimmer works in tandem with their coach to improve their skills and times in the pool. It’s the only way they can get to the Olympics.”

“The designers worked in tandem to ensure that the summer line was what their fans expected from them this season.”

“The insurance company works in tandem with the assessor to get an accurate valuation of your property for the claim.”

“We work in tandem with the auto shop to ensure we get the paint on the car as fast as possible so we don’t delay the project.” 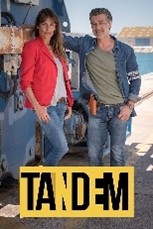 The origin of the expression “in tandem” comes from Latin. The exact translation of “tandem” from Latin means “at length.” Tandem first appeared as an expression in English in 1785. Originally, the term expressed the method of harnessing two horses to a carriage in a side-by-side configuration or behind each other.

Over the years, the phrase changed its meaning as we moved away from horses to the internal combustion engine. Today, engineers would use the term to describe drive chains working in tandem or V10 engines working in tandem to form a V20 output.

The phrase is in use in modern language, and you probably hear it all the time, even around the office. It’s also a way to express working in collaboration with other people or teams.

Phrases Similar to In Tandem

Phrases Opposite to In Tandem

Some people may confuse the word “tandem” with other words like “interjection” or “intervention.” Tandem is a similar word to “simultaneously” or “in partnership.” Using it to describe a collaboration might be suitable but not the best choice for representing the activity.

Acceptable Ways to Phrase In Tandem

You can use the saying “in tandem” when discussing events that happen simultaneously and have some relevance to one another. For instance, you could say you went skydiving in tandems, referring to you being attached to an instructor. Or you could say that you’re conducting activities in tandem with another person or company. The word could refer to you having a partnership with the other party to the scenario or being completely uninvolved with each other.