Are you looking for a way to tell someone you have the winning hand in a poker game? Maybe you want to show them proof of results of something they thought you couldn’t achieve? If that’s the case, you could present your cards or documents to them and use the expression, “read em and weep.” This post unpacks the meaning and origin of this phrase.

The expression “read em and weep” means that you have a surprise outcome in hand that no one else expects. It’s usually a common saying in poker when the winner wants to boast about their hand and play everyone else at the table for a sucker.

It refers to gaining an advantage over a person that thought they had the upper hand over you. It can refer to many other situations than playing card games. For instance, you could use it when you hand your great report card to your parents after they say you don’t study hard enough for your exams.

You can use “read em and weep” when referring to any situation where you achieve a result beyond other people’s expectations, and you have the proof to throw it in their faces.

“Here it is, boys, read ’em and weep. I had a full house the whole time. You guys are such suckers.”

“The reviews are in from last month’s product launch, and they aren’t great. Read em and weep.”

“Read em and weep. The sales figures speak for themselves. It’s time we cleaned house and got a new team.”

“There’s the leaderboard with the top scores. Read em and weep, my guy is on top, and there are only two tournaments left in the season.

“Read em and weep; there’s no way you’re doing better than this.” 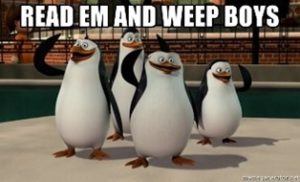 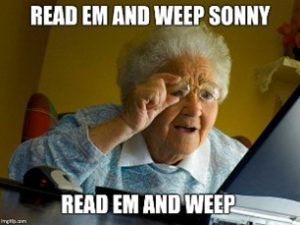 The origin of the expression “read em and weep” comes from the card game poker. The game involves players concealing their cards, hoping that the outcome of the dealer’s hand and the other cards in the game turn in their favor.

When a player has the best hand and wins the game, they can turn to the other players left in the plot and say “read em and weep” to show they have the winning hand. The earliest use of the expression in print comes from the early 20th century.

The San Antonio Evening News newspaper published the saying in its Sports News section in July 1919, where it appears as follows.

“With the exception of one or two close decisions, Umpires Lewis and Schaffer did faily good work, probably because they had been made very good ‘boys’ by the irate fans . . . Few arguments were indulged in with the arbiters. Read ’em and weep!”

Phrases Opposite to Read em and Weep

Using the phrase with the expectation of making people cry is incorrect. The “weep” in the expression refers to disappointment, not actual weeping. In most cases, the saying suits lighthearted, not vindictive, use.

You can use the expression “read em and weep” to tell someone that you achieved a result that they didn’t expect. The saying suits social and professional use. You could use it at work when you’re showing someone a contract they didn’t expect you to close.

You could use it with your friends when playing cards and show a winning hand when everyone thought you were bluffing. Or you could use it when someone questions your age, and you produce an ID document to verify your claim. It’s a versatile saying with many applications.