Did your parents say you look like a ‘dog’s dinner’ as you prepare to leave the house? This post unpacks the meaning and origin of this expression.

The expression ‘dog’s dinner’ refers to anything that looks messy, cluttered, or out of place. It originally referred to a style of over-dressing for an occasion.

However, the modern use of the term describes something that looks shabby or displayed in a pompously elegant manner. A dog’s dinner is similar to a ‘dog’s breakfast,’ with the figurative meaning of ‘muddle’ or a ‘confusing mess.‘

“You call this a meal? It’s a dog’s dinner. I wouldn’t feed that to my pets, let alone serve it to someone in a restaurant.”

“Look at this spreadsheet; it’s a dog’s dinner. Don’t you take any pride in your work? I can’t believe you’re ready to hand it over in this state.”

“I’m sorry, but your hair looks like a dog’s dinner. Didn’t you brush it this morning? Did you remember to clean your teeth? Your personal hygiene could use attention.”

“This room is a dog’s dinner. I’m coming back in ten minutes, and it should be clean. I want everything put away properly, or you’re grounded.”

“The inside of your car is a dog’s dinner. I mean, there’s old McDonalds wrappers in here, and I don’t even want to know what that green stuff is growing in the footwell.”

“This garage is a dog’s dinner. It looks like you’ve been hoarding stuff here for the last ten years. You’ll have to clean it out before listing the property.”

“I’m tired of your lack of effort. This project looks like a dog’s dinner. Take it away and do it again.” 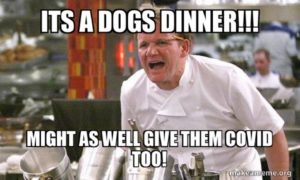 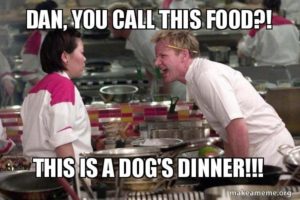 The expression ‘dog’s dinner’ is the shortened version of ‘Done up like a dog’s dinner,’ which first appeared in the UK during the early 1900s.  It’s an adaptation of the phrase ‘a dog’s breakfast,’ but both have the same meaning.

The original use of the expression described someone overly dressed for an occasion.  It also applies to military members wearing full uniforms.  The first appearance of the term is in ‘Scarlet & Hyssop,’ written by E. F. Benson in 1902, where it appears as follows.

“Scraps only, scraps from other places.  It always reminds me of a dog’s dinner,” said Lady Alston; “and all of us who live here are like scraps for a dog’s dinner, too.  Bits of things, remnants, a jumble sale, with everything priced above its proper value.”

The term spread to the United States in the 1930s, where it appeared for the first time in the American newspaper, ‘The Waco News-Tribune,’ on October 1933.

“A youth from the sidewalk called to a young cigarette-smoking lady at the rail: “What are you doing there all dressed up like a dog’s dinner?”

The term transitioned to anything that looked disheveled, out of place, or messy in the late 1950s.

Phrases Opposite to Dog’s Dinner

The phrase has nothing to do with serving your dog a meal. While it can describe a poor-quality meal, it’s not the common use of the expression. Most people use ‘dog’s dinner’ or ‘dog’s breakfast’ to describe someone with a messy appearance or a lack of care in their work.

You can use the expression ‘dog’s dinner’ to describe something that looks messy or displeasing to the eye. It’s a similar expression to ‘dog’s breakfast.’ If something is a dog’s dinner, it means you wouldn’t serve it to anyone, not even your worst enemy.

The term suits social and professional use. Use it at work to describe an employee’s disheveled appearance or lack of professionalism in their work. Use it at home to describe how your kid’s hair looks before brushing it in the morning or the mess they leave in their room.