Did someone tell you to stop ‘blowing smoke’ up their ass? This post unpacks the meaning and origin of this expression.

You can use ‘blow smoke’ in combination with other phrases to create a saying like ‘don’t blow smoke up my ass.’ If someone is ‘blowing smoke,’ they’re talking nonsense or lying to you. They could be blowing smoke to manipulate your emotions or get you to do something for them.

‘Blowing smoke’ refers to someone being untruthful or making outlandish statements. Typically, they do this to paint themselves in a better light to you or avoid receiving a punishment. If someone blows smoke, they’re avoiding telling you the truth.

“Okay, enough. You can stop blowing smoke up my ass. I’ve had enough of your nonsense. Just go back to class, and don’t let me catch you in the halls again.”

“Stop blowing smoke up my ass. Don’t you know it just makes you look like an idiot? I can see right through your lies. You can’t fool me.”

“Listen. I would have asked for it if I wanted to stand around and have you blow smoke up my ass. You’re not fooling anyone with your behavior. Get back to work.”

“Stop blowing smoke up my ass. Your intentions are clear, and you can’t manipulate me into doing it for you. Get it over with and do it yourself.”

“This employee started blowing smo0ke up my ass about why they were late for work. I told them to shut up, gave them a warning, and told him I’d fire him the next time he shows up late.”

“There’s no way that’s what really happened. Stop blowing smoke up my ass and give me the truth. I can see right through your lies.”

“Don’t blow smoke up my ass. What, do you think I’m an idiot? Just tell me the truth. I caught you out; there’s no reason to lie, so just give it up already.”

“I’d appreciate it if you didn’t treat me like an idiot. Stop blowing smoke up my ass. I can see right through your attempts to lie to me.” 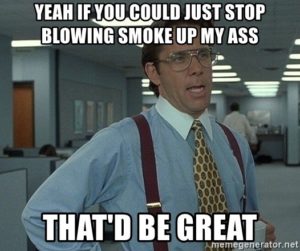 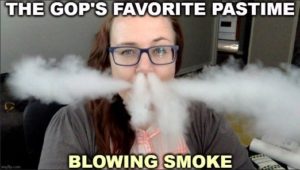 The expression ‘blowing smoke’ originates from 18th-century England. During the early 1700s, medical professionals would use the therapy of blowing tobacco smoke up patients’ rectums to alleviate certain ailments.

The practice went well into the late 1700s, with doctors using it to revive people that drowned or experienced seizures, bringing them close to death. The procedure was supposedly effective, although there is no hard evidence to support the claims that it benefits patients.

Language experts are unsure when the phrase entered the English lexicon as a way to call people out on talking lies or nonsense.

Phrases Opposite to Blow Smoke

The phrase has nothing to do with blowing smoke. The ‘smoke’ in the saying refers to lies or exaggerated statements. ‘Blowing’ the smoke means speaking. So, by telling someone to stop blowing smoke, you’re asking them to stop lying or embellishing the facts.

You can use the phrase ‘blow smoke’ or ‘blowing smoke’ when you want to call people out on telling you inaccurate or false information. The person may be leading you on or trying to convince you of something you feel is nonsense. It’s common for people to phrase the term as ‘stop blowing smoke up my ass.’