Are you looking for a way to describe the shady actions of people like politicians? If so, you could say that all they offer at a campaign rally is “smoke and mirrors” for the public. This post unpacks the meaning and origin of this expression.

The expression “smoke and mirrors” means that someone or an organization is trying to “keep you in the dark” about something. They present you with one argument or statement, and they are covertly working on something in the background.

The phrase originally applied to magic, but it moved into political language in the 1990s. Today, people will use “smoke and mirrors” to describe a government trying to cover up its actions with false or misleading information.

“Politicians are all smoke and mirrors. They promise the world and what the people want to hear, but when they get in office, they do nothing.”

“Don’t believe the hype about the invasion; it’s all smoke and mirrors to disguise the real problem going on behind the scenes.”

“That guy is all smoke and mirrors. He doesn’t let us in on anything, and I don’t know how we can trust him.”

“The global economy seems fragile and dependent on government policy, but it’s all smoke and mirrors, and it’s the Federal Reserve that has the real power over the global economy.” 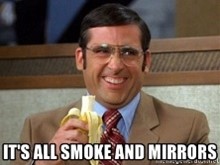 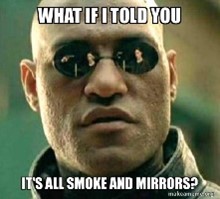 The expression’s origin, “smoke and mirrors,” comes from the magic industry. It’s a way of describing an illusion. Johann Georg Schröpfer coined the phrase when describing stage magic performed in the 19th-century.

The “phantasmagoria” shows of the time would use lanterns to project images and cast light onto conjured smoke in the air, portraying the illusion of floatation or the disappearance of people or objects.

American journalist, Jimmy Breslin, popularized the modern use of the phrase in his notes on “Impeachment Summer” in 1975. Breslin refers to the US political system using “smoke and mirrors.”

“All political power is primarily an illusion… Mirrors and blue smoke, beautiful blue smoke rolling over the surface of highly polished mirrors… If somebody tells you how to look, there can be seen in the smoke great, magnificent shapes, castles, and kingdoms, and maybe they can be yours.”

The use of the saying in political reporting led to its use in literature, appearing as the title of the book, “Smoke and Mirrors: The War on Drugs and the Politics of Failure,” written by Dan Baum, and published in 1996.

Phrases Similar to Smoke and Mirrors

Phrases Opposite to Smoke and Mirrors

The phrase no longer has any connection to magic. In modern language, people use it to describe someone deceiving them and not letting them in on the truth. Using the phrase to describe smoke and mirrors in magic shows is no longer the preferred format of the saying.

You can use the phrase “smoke and mirrors” when you’re trying to describe someone trying to “pull the wool over your eyes.” Essentially, it’s a saying implying that someone is leading you on or being disingenuous with you. They are using distraction tactics to keep you from seeing the truth, and they are intentionally keeping you in the dark about something. The saying suits professional and social use, and you probably hear it all the time.