Are you watching parliament? Why do the members chant “hear hear?” This post unpacks the origin and meaning of this expression.

The expression “hear hear” means to create a form of approval or consensus or let a speaker’s voice have its say. This old English interjection comes from the House of Commons, the largest [part of the legislative branch of government.

It can mean “hear him hear him!” or “Yes, yes, we agree.” The members in parliament will chant it, especially when the speaker is being overcome by jeers from the opposition.

If you turn on the parliament TV channel, you’ll see members using it in almost every session. It’s part of a long-standing tradition and an essential part of the language used in the House of Commons to give everyone a fair say and the people fair representation at the legislative level.

In a way, you could say that the phrase “hear hear!” is a critical part of freedom and democracy.

“Hear hear, Liz is a great choice for class president. I back her 100%, and I’m willing to run her campaign.”

“Hear hear, we fully stand behind the party’s request, and we believe the other honorable members should back the bill as well.”

“Hear hear, that was an excellent meal, baby. I do believe you’ve outdone yourself this time.”

“Hear hear, that’s the best decision you made this year, and if you keep it up, you’ll get somewhere in life.” 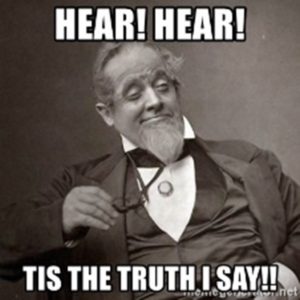 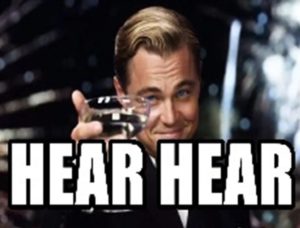 The origin of the saying “hear hear” goes back to the use of “hear ye, hear ye” in the 1600s. Parliament members would use the phrase in discussions concerning the legislature. The exact origin of the expression remains a mystery to language experts. However, some believe that it comes from changes to behavior in the parliament sessions.

In the 1600s, applauding a peer during the session was inappropriate and discouraged for members. Therefore to demonstrate their agreement with the speaker on the floor, the other members would shout, “hear him! Hear him!”

The expression was also in use on the street by the working man around the same time. Workers would use the term to catch people’s attention before making an announcement in the town square.

The 18th century saw the shortening of the expression to the current format of “hear hear.” Politicians still use it in this format in the House of Commons in England and Australia.

Phrases Opposite to Hear Hear

Using the expression “hear hear” to tell people that your heard something is not its correct use. The phrase has nothing to do with hearing; it’s a verbal confirmation of something someone else says in your presence.

You can use the expression “hear hear” to add your verbal confirmation to something they said. The phrase can suit professional and social situations. For instance, if your boss nominates an associate you believe deserves a managerial position, you could reinforce the nomination with “hear hear, she’s a great leader.”

If you were at home, you could add the expression when someone compliments your partner about the wonderful meal she cooked for you all. The term is a verbal confirmation, but it’s not very common in everyday speak as its somewhat archaic language is limited to the House of Commons and other political establishments.