Are you looking for a way to tell someone that they matter most to you in life? This post unpacks the meaning and origin of the proverbial saying, “the apple of my eye.”

Calling someone “the apple of my eye” means that you think they are your favorite person on the planet.

It means that you’ll do whatever it takes to make them happy and keep them safe. The saying can also apply to inanimate objects you treasure, like your car.

“My niece is the apple of my eye. She means everything to me, and I intend to help my brother and his wife out with saving for her schooling.”

“Susan is the apple of my eye. I love that girl, and I would do anything for her. She means everything to me, and I don’t know where I would be without her in my life.”

“Jefferson Elementary is the apple of my eye. In ten years as school district director, no other school manages to match its consistency with educational results.” 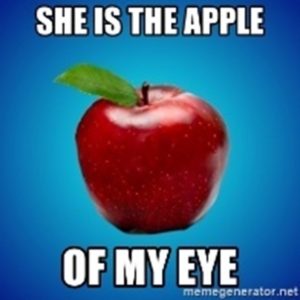 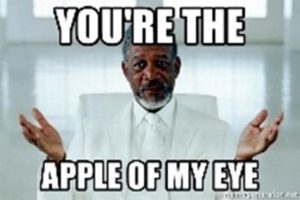 The origin of the expression “apple of my eye” goes back to the reign of King Aelfred the Great of Wessex in AD 885. The phrase also appears in Old English in “Gregory’s Pastoral Care.”

However, the phrase would stick around for many years before gaining popularity in the early 1600s. The English playwright William Shakespeare first coined the term in everyday use. Shakespeare used the expression in his play, “A Midsummer Nights Dream.”

The play has the following line.

“Flower of this purple dye,

Sink in apple of his eye.”

The phrase also has a biblical origin, appearing in the King James Version of the book, published in 1611. The term appears in Deuteronomy 32:10 as follows.

“He found him in a desert land, and in the waste howling wilderness; he led him about, he instructed him, he kept him as the apple of his eye.”

It also appears again in Zechariah 2:8 in the following context.

“For thus saith the LORD of hosts; After the glory hath he sent me unto the nations which spoiled you: for he that toucheth you toucheth the apple of his eye.”

While the Bible and Shakespeare are the original sources of the phrase in modern language, Sir Walter Scott gets the credit for popularizing it in everyday use. The author published his book, “Old Mortality,” in 1816, where it appears as follows.

“Poor Richard was to me as an eldest son, the apple of my eye.”

Phrases Similar to Apple of My Eye

Phrases Opposite to Apple of My Eye

Ways People May Say Apple of My Eye Incorrectly

Acceptable Ways to Phrase Apple of My Eye

You can use the phrase “apple of my eye” when you’re describing someone or something that is your “pride and joy.” It means a lot to you, and you hold it in high regard when comparing it to other things of similar stature or value.