Are you looking for a way to tell someone to be quiet? If so, you could use the proverbial saying, “silence is golden.” This post unpacks the meaning and origin of this phrase.

The proverbial saying “silence is golden” means that we all need to appreciate silence, and it pays dividends to keep quiet from time to time. The phrase places importance on the value of silence and its role in our lives. The saying can imply that it’s better to say nothing at all than open your mouth in some situations.

The phrase implies that “silence is a virtue,” and we should all enjoy the peace and quiet we get in our lives because it doesn’t come along very often. You can use “silence is golden” in social and professional situations with family members, friends, and colleagues.

“Gosh, Timmy didn’t your mother ever teach your silence is golden. Be quiet and eat your lunch.”

“You know what they say; silence is golden. This time here out on the lake is so still and peaceful.”

“Ann asked me if her dress made her look fat. I told her that it looked a little tight, and she went crazy on me. Sometimes, it’s better to realize silence is golden.”

“I didn’t realize silence is golden until I moved to the noisy city.”

“I confronted Maggie about the problem, and she said nothing. Her silence is golden, and I’m sure she gets the picture now.” 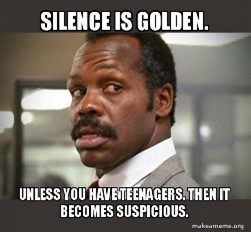 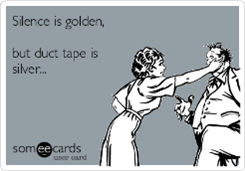 The origin of the proverbial phrase, “silence is golden,” comes from Ancient Egypt. Language experts are unsure of the exact origin of the saying, but most agree that its roots in the Ancient Egyptians. The first appearance of the expression in English goes to poet Thomas Carlyle. Carlyle translated the work “Sartor Resartus” from German in 1831. In the story, a character talks about the virtues of silence.

The full idiomatic expression is “speech is silver, but silence is golden.” However, the full version of the saying never gained traction, with people preferring to use the shortened version in language.

The earlier origins of the phrase trace back to the 14th century. The author Richard Rolle of Hampole wrote the following in “The psalter” or “Psalms of David,” in 1340.

“Disciplyne of silence is goed.”

Wyclif’s Bible, published in 1382, has the saying as follows.

“Silence is maad in heuen” (Made in Heaven).

Phrases Similar to Silence is Golden

Phrases Opposite to Silence is Golden

Silence is not a visible object. The proverb means that silence is precious, and we don’t get enough of it in a noisy world. So, using the saying to describe the value of silence is more valid than its color because it doesn’t have any color.

You can use “silence is golden” when you’re telling someone to stop talking or making a noise. The phrase suits professional and social use, and you probably hear it all the time. At home, you could use it to tell your kids to stop making a noise and turn off the TV. At work, you could use it to tell someone to stop saying something that might get them in trouble. There are several applications for this proverb, and the saying can have proverbial or sarcastic meanings, depending on the situation.