Is the rain pouring down outside right now? If so, you could say that it’s “raining cats and dogs.” This post unpacks the meaning and origin of this expression.

If you’re driving through a severe rainstorm, then you can say it’s “raining cats and dogs.” It’s a somewhat peculiar expression since cats and dogs don’t rain from the sky. Some people believe the phrase comes from a cat’s avoidance of water and its need to run for cover rather than remain outside in the rain.

“Wow, boss, sorry I’m late, but it’s raining cats and dogs out there with the hurricane getting closer to landfall.”

“I was driving home on the highway, and it was raining cats and dogs. People we’re hydroplaning their cars all over the place, and there was a 10-car pileup near the offramp.”

“It’s been raining cats and dogs for the last week, and it’s not showing any signs of slowing. I wonder if the dam is full and we’re out of the water crisis yet?

“It’s raining cats and dogs outside. If you’re going outdoors, take an umbrella or wait it out for a while.”

“We’re going to have to call off the fireworks display. It’s raining cats and dogs tonight.” 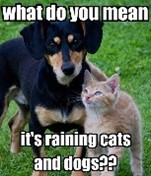 Language experts are unsure of the origin of the saying, “raining cats and dogs.” However, they can trace the early forms of the expression back to as far as the 17th century, where Richard Brome used a similar version in his comedy play, “The City Wit or The Woman Wears the Breeches,” in 1653.

The saying refers to being caught in stormy weather, using the following line.

“It shall raine… Dogs and Polecats“.

While “polecats” are not the same as the housecats we assume in the phrase today, it’s essentially the same meaning. The first use of the modern term appears in the writings of Jonathan Swift, in his book, “A Complete Collection of Polite and Ingenious Conversation,” published in 1738

“I know Sir John will go, though he was sure it would rain cats and dogs.”

Phrases Opposite to Raining Cats and Dogs

The phrase has nothing to do with cats or dogs. It’s a way of describing a heavy downpour. Using the expression to describe cats and dogs getting wet in the rainy weather is the incorrect use of the term. The phrase also describes powerful rainstorms, not brief, light showers.