Are you looking for a way to tell someone to take a minimalist approach to their life? If so, you could say to them, “less is more.” This post unpacks the meaning and origin of this expression.

The phrase “less is more” means that a minimalist approach is often the best strategy. The term started with use in the architecture industry to describe modernist design principles and the use of open, uncluttered space.

This principle transferred into the broader market, penetrating culture. As a result, we have a “minimalist culture” where people do not clutter their lives with materialistic goods. If you’re telling someone that less is more in a social situation, you could be telling them to stop trying so hard to impress another guy or girl.

You could also use it at work to describe a situation where you’re overanalyzing something or working too hard for little result. “Less is more” is a way of telling someone to scale back on their efforts, and they might see better results.

“Hey Dave, don’t you know less is more? There’s no need to put so many candles on that birthday cake; just put one on for every ten years.”

“I know people slate me about my minimalist lifestyle, but I feel less is more, and I don’t have to worry about clutter in my life.”

“Less is more, and going overboard with those appetizers is going to ruin the experience of the main meal for you.”

“Look at the artist’s generous use of negative space in their piece. It really does showcase the concept of less is more.”

“I was going to add all those accessories to my purchase, but my friend assured me that less is more and it will look better without them.” 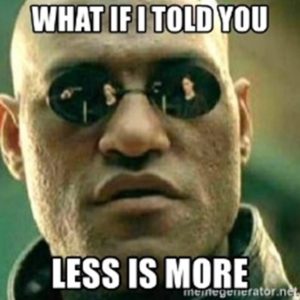 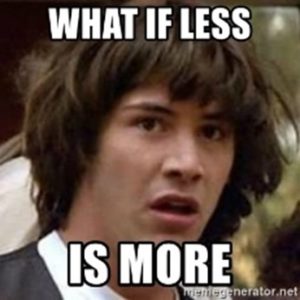 The origin of the idiom “less is more” comes from Robert Browning’s poem, “Andrea Del Sartolead,” published in 1855.

“Who strive – you don’t know how the others strive

To paint a little thing like that, you smeared

Carelessly passing with your robes afloat-

As a result, the phrase branched out into all areas of modern culture to describe a minimalist look or attitude towards something or someone.

Phrases Similar to Less is More

Phrases Opposite to Less is More

The saying “less is more” is technically incorrect and makes no sense. Less cannot be more. So, using the expression in itself is preposterous. However, people use it in minimalist language to describe everything from architecture to lifestyle principles.

You can use the phrase “less is more” when you’re trying to impress a minimalist concept on someone. For instance, when someone tells you that your apartment has hardly any furniture, you could say “less is more” in response. You could also use the saying to describe concepts like passive income, where the less you do, the more you earn. It’s a minimalist saying that attributes the action of doing less to achieve more in life.