Are you looking for a way to tell someone that what they are saying is irrelevant and means nothing to you? If so, you could tell them that it’s “for the birds.” This post unpacks the meaning and origin of this expression.

The meaning of the expression “for the birds” is “something trivial or of little importance.” If you tell someone something you think is important, and they reply with “that’s for the birds,” it means that they don’t place any value in what you’re saying, and they think you’re talking nonsense.

For instance, someone could pitch you a pyramid scheme and ask you if you’re interested in joining. You could reply with “that’s for the birds” to show them you have no interest in being part of their scam. This phrase tells them that you are not gullible, and you know that they are trying to scam you.

“I swear after Sandy dumped me, I promised myself that love is for the birds. There’s no way I’m getting back in a relationship again.”

“That guy’s speech was for the birds. I don’t care what his views are on climate change; he’s just too arrogant and biased in his views.”

“This club is for the bird’s man; lets’ get out of here and go somewhere good.”

“This homework is for the birds. Why bother doing calculus when it’s such a beautiful afternoon? I’m not going into STEM in college anyway.”

“I’m telling you, that’s for the birds; you don’t need that in your life right now.”

“What do you mean it’s the opportunity of a lifetime? I see no value in that whatsoever. It’s for the birds, keep away from me and lose my phone number.” 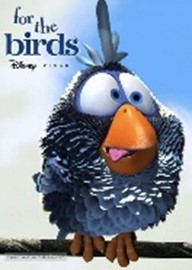 The origin of “for the birds” comes from the US military towards the end of WWII. The earliest recorded example of the saying comes from “The Lowell Sun” in October 1944. The newspaper published an interview with Sergeant Buck Erickson from Camp Ellis, Illinois.

“Don’t take too seriously this belief that we have football at Camp Ellis solely for the entertainment of the personnel – that’s strictly for the birds.”

The phrase is common and in use today. It’s the title of movies, books, and many other forms of media, and you probably hear it all the time.

Phrases Similar to For the Birds

Phrases Opposite to For the Birds

Ways People May Say For the Birds Incorrectly

The expression has nothing to do with giving birds anything. So, using it to say that the birdseed you bought at the pet store is “for the birds” would be the incorrect use of the expression. The phrase suits use when you’re trying to define something trivial and a waste of time. So using it to describe something that grabs your attention is the incorrect use of the phrase.

Acceptable Ways to Phrase For the Birds

You can use the saying “for the birds” when you’re trying to tell someone that what they are saying or their actions are trivial and not worthy of your attention or recognition. The phrase suits use in social and professional conversations.