Are you searching for a term to describe a fact without official recognition or approval? If so, you could use “de facto.” This post unpacks the meaning and origin of this phrase.

The “de facto” is a Latin word meaning “in reality” or “of fact.” It usually appears in contrast to the word “de jure,” which is another legal term meaning “officially” or “law.” So, if you are the de facto governor of the state, you act in the position even though you were not officially elected yet.

These phrases can apply to many situations, but they usually occur in political speech when referring to a business or government’s authority.

“The country is going through a rough time right now. After the assassination of the president, the party installed the chancellor as the de facto commander in chief.”

“I know this is supposed to be the basement, but the rain is seeping through the walls is turning it into a de facto swimming pool.”

“I get that these are the de facto boundaries on your property. But is it really making that a big of a difference to your life if the fence is half an inch too far over?”

“These are the de facto guidelines for the position. The manager will fill you in on the details when you show up for your first shift.” 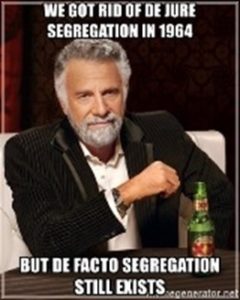 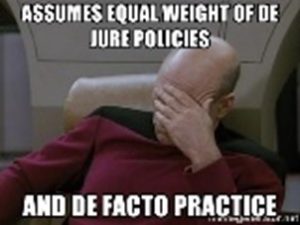 The phrase “de facto” originates from the international business and legal community. In the past, it was rare for companies to receive legal assistance on all pending matters due to the expense of representation. As a result, these companies would carry out practical solutions for years before anyone discovered the oversight of laws, regulations, or official policies.

The phrase many have its exact origins in contract law. Business partners often disregard form agreements during early operations allowing them to remain flexible as they make changes to the business to improve its profitability.

When the partners sell the company, the difference between the de jure and de facto state of affairs requires the use of an attorney so the partners can officially work things out between them.

Phrases Opposite to De Facto

The term “de facto” means that something is factual, but there is no official confirmation of those facts or events. Using the phrase to describe official appointments and conformations would b the incorrect use of the term. You also wouldn’t use this outside of professional situations or formal conversations as it is more technical than social language.

You can use the phrase “de facto” when you’re referring to events, documents, property, or people. You’ll use it to describe something important that is factual but has no official announcement backing the claim. For instance, if the country’s president dies, you could say that the vice president is the de facto leader of the country until the next election. If your manager quits, the team leader would be the de facto manager until the company can appoint a replacement. If you’re out on a mission with a SEAL team, and the squad leader dies in battle, the second in command would become the team’s de facto leader.