Are you looking for a way to warn people of incoming danger or bad news? If that’s the case, you could tell them that they are in the calm before the storm, and they should expect bad things on the horizon. This post unpacks the meaning and origin of this expression.

“Right now, it’s the calm before the storm. The boss said he’s coming in at 3 pm, and he wants to have a word with all of us; I think he’s angry about last month’s sales figures.”

“What are we going to do? Mom’s coming home at 4 pm, and if she finds the garden in this mess, she’s going to kill us. Oh well, it’s the calm before the storm, so we may as well enjoy it.”

“This is just the calm before the storm. Wait till mom gets home and finds the garage in that state; she’s going to explode.”

“We’re waiting for the launch materials right now. As soon as we have the press pack, we’re going to hit the phones hard. It’s just the calm before the storm around the office right now.” 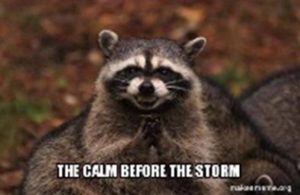 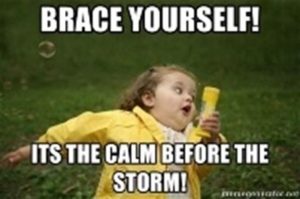 The origin of the phrase “the calm before the storm” comes from the maritime industry. In the periods before a storm begins, the air can become eerily still as the pressure changes. Usually, the clouds will start to gather, and the skies turn black, but the atmosphere is calm until the squalls arrive and the beginning of the wind and rain.

This phrase makes its first appearance in writing in the play “The Dumb Knight,” written by Gervase Markham and Lewis Machin, in 1601, where it appears as follows.

“Coloquintida. Fast lock’d in her bed, with a close ward to devour thee my brave paraquito; but hush, no words, there is a calm before the tempest.”

The play uses the word “tempest” in place of “storm,” which is the more common version today.

Phrases Similar to Calm Before the Storm

Phrases Opposite to Calm Before the Storm

Ways People May Say Calm Before the Storm Incorrectly

While the saying has its roots in the maritime industry, it has little to do with the weather in the modern language. People use the saying as a warning of impending danger. Therefore, using the saying to describe the weather, while technically correct, is not the most common use of the saying.

Acceptable Ways to Phrase Calm Before the Storm