Are you looking for a way to give someone kudos or tell them that you owe them a favor? If so, you could use the expression “brownie points” to describe your approval of what they do for you. This post unpacks the meaning and origin of this expression.

You could also say that taking your wife out for dinner and a movie and showering her with flowers would be a way of earning brownie points with her on her birthday. The phrase is similar to “brown-nosing,” but it doesn’t have the same derogatory context.

The “brownie points” are usually thoughtful contributions and are not forced or manipulated.

“I’m going to score huge brownie points with the boss for completing this project over the weekend. So, I don’t mind missing out on the fun at the concert if it’s going to get me ahead in my career.”

“I’m scoring brownie points with the wife right now. She’s six months pregnant and craving these sweets, but she can’t find them anywhere, and I just got her ten boxes.”

“You can score brownie points with me by taking out the trash if you want.”

“No way, the brownie points aren’t worth the hassle with that; I think I’ll sit it out, thanks.”

“Do you want to earn some brownie points with me? Be a star and go down to the store to get some milk for breakfast.” 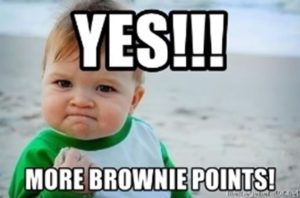 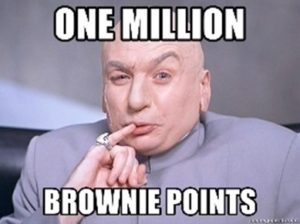 “Awards were given to Lois Bingaman and Helen Romig for attendance and Brownie points.”

The phrase’s first use outside of commendations within the Brownies organization comes from “The Los Angeles Times” on March 15th, 1951. The LA Times published an article titled “Brownie Points–a New Measure of a Husband” by Marvin Miles.

The article sees Miles go to length explaining the meaning of the term, showing that it was a new introduction to language at the time. The article also included a strip cartoon with the caption,

“I should have been home two hours ago … I’ll never catch up on my brownie points.”

Phrases Opposite to Brownie Points

The phrase has nothing to do with brownies or points. It’s a way of saying that someone gains kudos in someone else’s eyes for their actions or words. Using it to describe brownies or any baked goods is incorrect.

You can use the expression “brownie points” when you’re trying to describe someone gaining “kudos” or credit from someone else with authority over you. For instance, you could score brownie points with the boss at work if you close a big sale.

You could score brownie points with your partner at home if you bring them some flowers. It’s a way of getting credit with someone important in your life through completing an action they find impressive.