Are you looking for a way to congratulate an employee or colleague? If so, you could use the expression, “kudos to you.” This post unpacks the meaning and origin of this phrase.

The meaning of the phrase “kudos to you” is “credit goes to you.” Kudos is a Greek work carried into the modern English language, and it still has plenty of use today in professional conversation. “Kudos” are congratulations or “credit” given to you in a professional setting by your boss or colleagues.

For example, if you were to work all night to finish a project for an important deadline, your boss could say “kudos to you” in an attempt to praise you for your effort. However, the phrase also has a darker side, showing hostility.

In the same scenario, if you were to outdo another employee, they could say “kudos to you” as a way of saying, “well played,” but watch out for me next time. Kudos is a formal term, and you’re unlikely to use it in a social setting.

“So, you beat me out for the salesman of the month in the final day after I go home. Kudos to you. I suppose he who stays the longest laughs the loudest.”

“Kudos to you, Kim; you really know how to make things happen for yourself. You’re climbing that corporate ladder all the way to the top.”

“Well, kudos to you. Do you think you really deserve it? I mean, didn’t Mike give you that idea last month? Where’s his credit for it?”

“You did well on this project, Kayla. Kudos to you. You took charge and showed people you have the managerial skills to do the job.”

“Kudos to you, Ted, you made it happen for the company, and now everyone wants to network with you. Big opportunities are coming your way.” 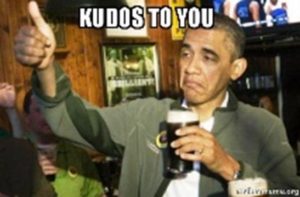 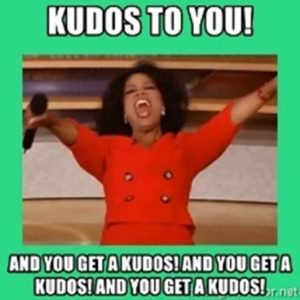 The origin of the term “kudos to you” comes from the Greek word, “Kudos” meaning “praise” or “renown.” The word’s meaning stuck to its original format, and it started to gain popularity in the English language in the late 18th century.

No one knows the exact origin of the word. However, some language experts believe it comes from the rise of corporate culture in the early 1900s. As employees would try to climb the corporate ladder, they would look to receive “kudos” from their boss and peers to gain recognition.

Phrases Similar to Kudos to You

Phrases Opposite to Kudos to You

Ways People May Say Kudos to You Incorrectly

Using the phrase “kudos to you” to describe anything other than giving someone credit is the incorrect use of the expression. You would use the term to mock someone or tell them that they don’t serve what they get.

Acceptable Ways to Phrase Kudos to You

You can use the phrase “kudos to you” in a genuine or sarcastic format. If you want to celebrate the achievements of colleagues and tell them that they deserve praise, you could say to them, “kudos to you.”

However, you could also use the phrase when you’re trying to tell them that they beat you to the task. That scenario would also be suitable for replacing a term like “well played” in place of “kudos to you,” but they both have a similar meaning.

Basically, you’re telling someone that you give them credit for their achievement or contribution to a project, task, business, or any social or professional construct.