Are you getting ready to leave on your road trip across the country? If so, you could yell “anchors away” to your friends as you leave the driveway to signal the start of your adventure. This post unpacks the meaning and origin of this expression.

The official meaning of the saying is to pull up anchors and set sail. However, with the widespread adoption of the expression in culture, it changed to a different meaning. Now, the saying means that you’re leaving imminently and people should expect your departure.

“When anchors aweigh, look around the harbor, and it’s empty. That’s not a pretty sight for the harbormaster.”

“When the ship failed to move out of the slip, the captain turned to the first mate and asked him to check if anchors are aweigh.”

“When the harbormaster anchors “anchors aweigh” over the radio,. It means that everyone needs to get out onto the water right now.”

“You can sit around thinking about the bad times in life, or you can decide to free yourself from depression and “anchors away” into a new life.”

“As the tide rolled in, we cried “anchors aweigh” and headed out to sea.” 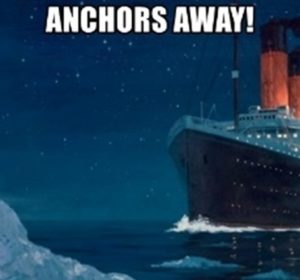 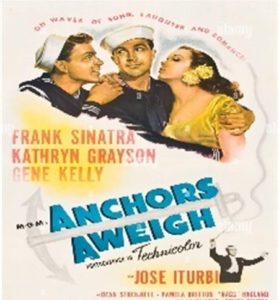 The earliest reference to the expression “anchors aweigh” comes from the maritime industry. The book “The Tempest,” authored by John Dryden in 1670, has the saying in the following original variation.

Trincalo: “Is the Anchor a Peek?”

The phrase would evolve over the years, with Admiral William Henry Smyth, using it in his dictionary “The Sailor’s Word-Book: an alphabetical digest of nautical terms,” published in 1867. It appears as follows.

“The anchor is a-trip, or a-weigh, where the purchase has just made it break ground, or raised it clear. Sails are a-trip when they are hoisted from the cap (thick block of wood), sheeted home, and ready for trimming”

Charles A. Zimmerman composed the song “Anchors Aweigh” in 1906, with Alfred Hart Miles writing the lyrics. The United States Navy would later adopt the song as its anthem.

“Stand Navy down the field, sails set to the sky.

We’ll never change our course, so Army, you steer shy-y-y-y.

Phrases Opposite to Anchors Aweigh

Some people may still use the phrase to express pulling up the anchor on a boat and sailing away. However, the spread of the expression into modern language means that most people use it outside the maritime industry.

So, it’s more common to hear the saying referencing other actions of leaving somewhere for a new destination.

You can use the expression “anchors aweigh” when you’re describing the action of leaving for a destination. For instance, you could be pulling out of the driveway on vacation and say “anchors aweigh” to the family as you start your journey to your destination. While driving a car and not a boat, it would be the correct use of the term in modern language.

The phrase suits use in social and professional conversation. For example, if you’re at the office and want to tell someone that you’re starting your daily duty of calling clients, you could say, “anchors aweigh! Let’s dive into these calls.”