Is your friend annoying you by telling you what to do while playing World of Warcraft? You could always ask them to shut up and stop backseat gaming. This post unpacks the meaning and origin of this expression.

The phrase also applies to online gaming. If you have a teammate taken out of the competition, they may start spamming the chat with ideas for the team.

Both examples of backseat gaming are annoying to the gamer in question, and it’s a matter of respect and politeness for the other gamers to be quiet when they are playing unless you have something important to add.

If people identify you as a backseat gamer, it makes people less likely to include you in their online and offline gaming activities.

“Gosh, Jamie, can’t you shut up for five minutes. You’re always backseat gaming, and it breaks my concentration.”

“Backseat gaming is so annoying, and Jamie does it all the time. I want to punch the guy.”

“Say no to backseat gaming; it’s irritating, and Jamie needs to stop it right now, or we’re all going to ban him from the chat.”

“Don’t let Jamie’s backseat gaming get to you. He’s just overenthusiastic and wants to help.”

“I know Jamie is trying to help with his backseat gaming, but it’s just annoying.”

“Backseat gaming has to be the biggest problem in Twitch chats; these people actually think the streamer is listening to them. It’s hilarious.”

“Stop backseat gaming, Jamie; no one wants to hear what you have to say in the chat.” 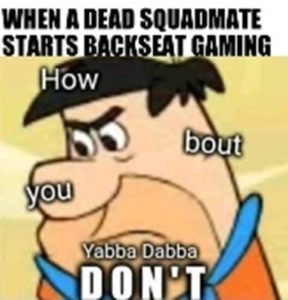 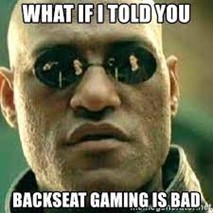 The origin of the expression “backseat” gamer comes from the rise of the gaming era. The term’s first use comes from the popularization of home video games, but it’s been around since the early days of arcades. However, the development of home gaming meant that more kids had access to games than ever before.

As a result, many family members and friends would fight over the use of the controls. When some kids don’t have control over the game, they start telling others what to do, hence the creation of the term.

No one knows who really coined the phrase, but the earliest entry of the term in the Urban Dictionary traces back to 2006.

Phrases Opposite to Backseat Gaming