Are you looking for a way to describe a competitive environment? You could say you’re operating in a “dog eat dog world.” This post unpacks the meaning and origin of this expression.

The expression “dog eats dog world” means a very competitive environment. Most people use it to describe the business world and people operating in their industry. For example, the tech space is a dog-eat-dog world, and if you don’t keep up with trends, your company falls apart.

A “dog-eat-dog world” refers to an industry where everyone is competing for the same thing, and they are willing to use an unfair advantage to get what they want.

It means that someone is willing to get ahead at your expense and place you in danger to allow themselves to succeed. It can refer to an environment lacking ethics where people will do anything to get ahead, at any cost.

“Man, it’s a dog eat dog world out there in the press pit. Everyone is jockeying for position, and if you aren’t firm with people, they walk all over you.”

“We live in a dog eat dog world, my friend. If you don’t stay ahead of the pack, then sooner or later, someone’s going to have you for breakfast.”

“This is a dog eats dog world, my brother. If you aren’t willing to do it, ten people behind you will.”

“Our business operates in a dog eat dog world. The environment is hostile, and new companies find it hard to build market share.”

“This is a dog-eat-dog world, and nothing will change it. People only look out for themselves nowadays.”

“This dog eat dog world is starting to get on my nerves. I think I need to move out into the country to escape.”

“If you think it’s a dog eat dog world, you’re right. I haven’t ever seen such a competitive environment.” 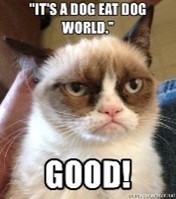 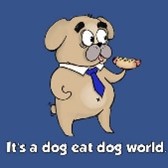 The expression “dog eats dog world” comes from a contradiction of the Latin proverb “a dog does not eat the flesh of a dog.” The earliest version of the English version of the saying appeared in print in 1543. However, the quote thought responsible for the modern phrase comes from Thomas Fuller, in his book “Gnomologia,” published in 1732.

“Dogs are hard drove when they eat dogs.”

The modern spelling and format of the saying were in circulation in language as a popular expression by the 1800s. Language experts are unsure of the exact origin of the modern phrase or when it first appeared in print.

You use the expression “dog eat dog world” to describe a competitive environment where some people have an unfair advantage over others. A dog eat dog world is similar to other sayings like “survival of the fittest.” Some dogs are bigger and more vicious than others, and they eat the weak.