Is your partner about to wake the baby? If you feel like an extra five minutes of rest, you could tell them to “let sleeping dogs lie” before they wake the kiddo and the crying begins. This post unpacks the meaning and origin of this expression.

The meaning of the expression “let sleeping dogs lie” is to prevent any disturbance to a scenario that might cause a conflagration leading to trouble or frustration.

For instance, if you’re wondering whether to wake the baby, it might be a good idea to let sleeping dogs lie so you can avoid them crying when they wake up.

It can also refer to not instigating trouble that may cause the onset of a dangerous situation. Or, it could mean to walk away from an argument rather than present a case that turns it into a physical confrontation.

The phrase can also mean not bringing up bad discussion topics if people have forgotten about them.

“Maybe we could tell the boss about this. Then again, maybe he doesn’t need to know. Let’s rather let sleeping dogs lie than tell him and get in trouble.”

“We should probably wake the kids up from the afternoon nap and tell them to get ready for the movies. Then again, maybe we should just let sleeping dogs lie and enjoy the peace and quiet.”

“Why did you go and do that? There was no reason to tell them that and start a fight. Why can’t you just let sleeping dogs lie?”

“I see you contemplating whether you should tell them the truth. To be honest, sometimes, it’s better to just let sleeping dogs lie.”

“Let’s let sleeping dogs lie on this one. I see it just causing more trouble if we bring them into this.” 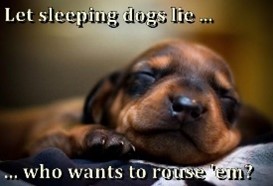 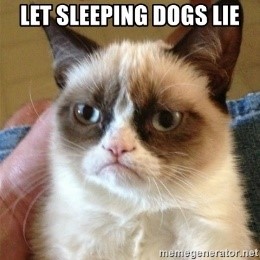 The origin of the expression “let sleeping dogs lie” comes from the author, Chaucer. His work, “Troilus and Criseyde,” published circa 1380, is the first written reference of the saying that would later become the modern version.

“It is nought good a slepyng hound to wake.”

To find the modern version of the saying, we have to go to the 19th century. London Magazine published an article in 1822 titled “The Second Tale of Allan Lorburne,” where the saying appears as follows.

“Let sleeping dogs lie, said the daft man when he saw the dead hound before him.”

Some people may use the phrase to refer to sleeping dogs. While that’s not technically incorrect, it’s not the modern use of the saying. If you’re letting sleeping dogs lie, you’re preventing the conflagration of a potentially volatile situation. The expression has nothing to do with dogs in its modern use.

You can use the phrase “let sleeping dogs lie” when you’re trying to tell a person not to disturb the current situation or environment. It can also mean not to tempt fate, as it could cause a problem for you. The expression suits professional and social use.

If you have a minor problem at work you can resolve, and a colleague wants to tell the manager, you could say “let sleeping dogs lie” and fix the issue yourself. Bringing the manager into the problem might land you in a disciplinary hearing, so it’s best to leave them out of the picture.