Are you playing Fortnite and want to let the other players know their skills are garbage? You could say they are “dog water,” and you can’t play with these amateurs. This post unpacks the meaning and origin of this expression.

The expression “dog water” means “trash” or “rubbish.” It refers to a player’s skillset using the Fortnite gaming platform. This multi-player game is a “shoot-em-up” where people play in teams.

If you’re up against a team and your skills are much better, you could say the other team is “dog water” in the chat to humiliate and discourage them.

The term “dog water” is a nice way of saying “dog sh*t” without getting in trouble for using profanity on Twitch.

“You guys are dog water. You have no skills, and it’s like playing against noobs. What are you, trying to make us look bad by playing unranked guys like you?”

“I don’t know why this team is competing against us, but they’re dog water. We’re going to clean them up inside ten minutes.”

“Your approach to the game is dog water. Watch our style and strategy and try to learn something from that.”

“I don’t know why you think you’re so hot when your skills are garbage. You and your team are dog water, and I wouldn’t let you shine my boots.”

“What’s going on with you people, you’re dog water, and we’re elite. Next time, don’t come near our team, or we’ll exit you for good.”

“There is no good way to put this. Your skills are dog water. If I were you, I would give up the game and start thinking about doing something else with your time.” 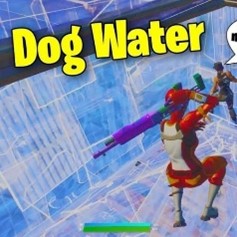 However, the term appears as “dog water” because the platform’s chat algorithm bans players from using profanity. So, dog water became a popular substitution and part of the logos of “algospeak” designed to avoid detection by the Twitch bots when searching chat.

The term first appeared in the Urban Dictionary on December 12th, 2020, as a way to let the other team or player know their skills are weak. The exact definition is “when you’re absolute garbage at a video game.”

The insult gained traction in early 2021. Twitch streamers Ludwig and Dream started using it, and it spread like wildfire throughout the platform and across YouTube.

Phrases Opposite to Dog Water

The phrase has nothing to do with dogs or water. It’s a way of referring to the water left in a dogs bowl after its finished drinking., The saliva and debris in the water from the dog’s mouth make the water unsuitable for drinking. Drinking the water would likely evoke a vomiting response.

You can use the phrase “dog water” when referring to people’s online gaming skills. If you’re playing Fortnite and give a team a thrashing, you could say their skills are dog water, and they should think about doing a little practice before challenging you again.

The phrase has online and offline use. Fortnite is one of the biggest online gaming platforms in history. As a result, billions of kids around the globe are familiar with the slang used in the game. However, finding people above 16 years old who know the term’s origin and meaning is challenging.

Despite its niche use and origin, most people will understand what you mean if you approach them and say they have dog water for a skill set.