Are you a gamer? Do you enjoy playing Call of Duty and other first-person shooter games? If so, you’ve probably seen people using the phrase “F in the chat” or just the letter F while commenting on other people’s character loss during the game.

F in the chat is a slang term adapted for online gaming, and it has next to no use outside of the internet and the gaming community.

This post unpacks everything you need to know about using F in the chat in an online conversation. We’ll discuss the origin and meaning of the phrase.

If you’re playing a Call of Duty online, you can type F in the chat when someone complains to you about their character dying. It’s a humorous way of poking fun at the other person, and many gamers use and understand the phrase.

F in the chat is also the subject of many viral memes, and it also acts as a way of expressing your condolences about a non-event in the game, where people take their character more seriously than they should. F in the chat is a similar way of saying “Sorry for your loss” in the gaming world.

Many people use it to get a rise out of the other player, and we can also consider it a form of “trolling” the other players in the game. The use of the phrase only suits the gaming world, and people don’t use it outside of chatrooms other than to create viral memes. 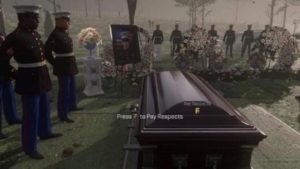 “If you want to pay your respects, F in the chat.”

“F in the chat” is an idiomatic phrase originating from the world of video gaming. The use of the phrase first appeared in the chat of the online war game, “Call of Duty: Advanced War,” in 2014. If your character dies in the game, you have the option of attending a funeral to show your respect for the player’s efforts in your campaign. The funeral encompasses a montage of the most important aspects of the player’s interactions during the campaign.

If players wished to attend the funeral and watch the video, they would type the letter “F” (Funeral) into the chat window. The game’s official request would appear as “Press F to pay respects.”

However, as gamers do, the community quickly reacted, turning the F into the vulgar language that we won’t report here. The use of the callous language became amusing to gamers, and the meme took off in all gaming platforms involving combat scenarios.

Phrases Similar to F in the Chat

Phrases Opposite to F in the Chat

Ways People May Say F in the Chat Incorrectly

The phrase “F in the chat” is only suitable for social interactions and gaming. Using the phrase in professional settings is inappropriate, and people may think less of you for saying it.

Acceptable Ways to Phrase F in the Chat

“F in the chat” suits use in social situations when gaming online. It’s a way of being genuine or being sarcastic to another player after they die in the game. You can also use the phrase when you’re trying to impress upon someone that you don’t care about their current situation.