Is someone trying to get on your nerves? Maybe they are getting in your way or teasing you? If that’s the case, you could always give them a veiled threat and tell them to stop it, or they will “catch these hands.”

This post unpacks everything you need to know about the meaning and origin of the term and how to use it in conversation.

If you’re using the phrase “catch these hands,” you’re referring to punching someone if they ask for it. Typically, it’s a subtle threat, and you can use it when directly addressing the person causing your distress or when talking to someone else about the said person.

The phrase also suits general use, such as “if anyone tries to rob me, they’re going to catch these hands.” Typically, you’re referring to yourself as fighting-inclined, and you have experience in street fighting or combat sports. By saying “catch these hands,” you’re implying that you know how to defend yourself, and you’re willing to get into a fight with the person.

The phrase has a serious or comical context, depending on the situation. Sometimes, the use of the phrase can elicit a laugh, or it could result in a confrontation. You’ll find it in forums and gaming chats online, and people also use it in real-world scenarios.

Most people that use the term understand street language, and they have an affinity for street culture brought into the English language by the rise of hip hop in culture during the 90s and 2000s. 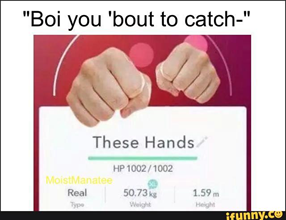 “If you don’t put down that bag, you bout to catch these hands bruh.”

“Try me, and you’re bout to catch these hands son.”

“You about to catch these hands, what you think about that?”

“keep talking and you bout to catch these hands.”

“can u believe this guy, he’s bout to catch these hands if he keeps that up.”

The origin of “catch these hands” comes from World Wrestling Entertainment (WWE). One of the wrestlers on the roster, “Strowman” is the first person to coin the phrase. Strowman, like most other wrestlers, presents himself as the ultimate alpha male.

The WWE wrestlers were infamous for using catchphrases to rally their fan base behind them. Strowman would use “catch these hands” when talking about his fellow competitors and their unwillingness to face him in the ring.

Phrases Similar to Catch These Hands

Phrases Opposite to Catch These Hands

People may use the term literally, referring to hands catching something like a physical object. For instance, using the phrase when you’re playing video games to describe your nimble key-work would be the inappropriate use of the phrase. “Catch these hands” is not suitable for use in professional settings.

You can use the phrase “catch these hands” in social situations when you are with friends. It serves to warn someone else that you are willing to resort to violence if they continue with their behavior. You’ll also use the term when talking to younger people who understand slang. Older Boomer generations might not know what you are talking about when using the phrase.