Did a colleague at work just blame you for something that’s their responsibility? If so, you could say they decided to “throw you under the bus.” This post unpacks the meaning and origin of this expression.

To “throw someone under the bus” means letting them take the blame for something. At the same time, you expect to get off scot-free from any accountability in the situation.

You would be betraying a partner, a colleague at work, a friend, or anyone around you that you’re using to take the fall for something you did wrong.

“Man, Gary really threw me under the bus on that one. I didn’t even see it coming. He totally blindsided me in the deal.”

“Why are you throwing me under the bus with this. You know you were responsible for the accident, and you expect me to take the fall for you? Get real.”

“All that manager does is throw the sales team under the bus at the end of the month. He knows how to divert the attention from himself.”

“Oh no, honey, why did you throw me under the bus like that? You didn’t have to tell your parents that I don’t want them here for Thanksgiving this year.”

“I can’t believe Tommy threw me under the bus like that in class. He totally told the teacher it was me so he could avoid going to detention.” 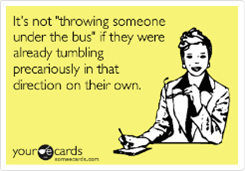 The origin of the expression “throw under the bus” remains a mystery to language experts. However, it seems to have come from New York in the mid-80s.

As transportation grew and people started working in offices around the city, time was an important commodity. If you missed the bus, you would be late for work, which might cost you your job.

As a result, people said that they were willing to “throw people under the bus” to get it to stop so they could make it to work on time. However, there is no proof confirming this origin story.

The phrase also has British origins, where it appeared in the Times newspaper on June 21, 1982, in reference to politics.

“The Conservative benches listened to her in silence. She was in deep trouble, and the lobbies hummed with the prospect of her departure. President Galtieri had pushed her under the bus, which the gossips had said was the only means of her removal.”

Phrases Similar to Throw Under the Bus

Phrases Opposite to Throw Under the Bus

Ways People May Say Throw Under the Bus Incorrectly

The phrase does not involve the action of throwing people under a bus. Such an action would be potentially classified as attempted murder. It’s a way of getting someone else to take the fall for you in a bad situation, at the cost of their reputation or health.

People will use the phrase “to throw (them/someone/me/you/brands/companies, or many other entities) under the bus.”

Acceptable Ways to Phrase Throw Under the Bus

You can use the phrase “throw under the bus” when discussing how people left you as the fall person in a situation or “hanged you out to dry” for something they did themselves. It’s a common term in politics where politicians will throw others under the bus if they think it serves their benefit in a presidential or governmental election race.