Did your boss tell you you’re doing a great job, and she’s glad you’re ‘on the ball’ with the project? This post unpacks the meaning and origin of this expression.

The expression ‘on the ball’ refers to someone sharp, intelligent, motivated, and capable. They are someone that doesn’t need any nurturing or assistance to achieve outstanding performance with what they do in life or in their career.

If someone is ‘on the ball,’ you can rely on them to get things done at work or home. They are attentive and good with problem-solving, and you don’t have to micromanage them. Being ‘on the ball’ means you’re a top performer. The phrase can apply to athletics, academics, or a career.

“That new guy in the electronics department is on the ball. I heard him break down the components of a DSLR to a customer, and it was like listening to someone that built the thing. Amazing.”

“Don’t worry, boss, I’m on the ball. The projects are on track, and we should have them ready before the deadline. The team is working day and night on it.”

“You’re really on the ball today. Have I never seen you this sharp before? What’s the reason for your outstanding performance?”

“Mike’s on the ball. He knows what’s going on and what he needs to do. It’s great to have someone on the team we don’t have to train from the ground up.”

“Don’t worry. She’s on the ball and has everything under control. The kids are getting unruly, but she’ll sort them out.”

“The waiter here is on the ball. I don’t think I’ve had to request a thing since we sat down. We need to leave her a big tip for the outstanding service.”

“I thought you were on the ball, but it looks like you dropped it instead. I don’t know if you’re the right fit for this company.” 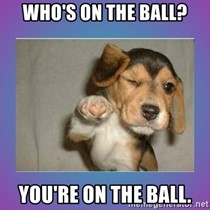 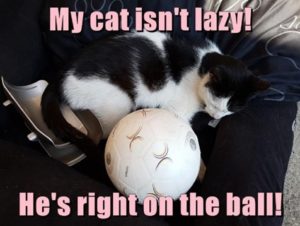 The expression ‘on the ball’ originates from ball sports. However, language experts are unsure of which sport spurred the idiom or who coined the phrase. The modern term is an iteration of ‘keep the ball in the air,’ which was popular around the 1800s.

The phrase crossed the pond from the UK to the US in the 1900s. Baseball commentators were the first to coin the expression ‘on the ball’ during games. The commentator would use the phrase to describe a talented pitcher.

Around 1989, the phrase shifted to its modern idiomatic meaning of paying attention and getting things done. J. Laughlin and W. C. Williams published their work, ‘Selected Letters,’ containing a letter written by Williams in 1939, where it appears as follows in the modern context.

“The novella by Quevedo… right on the ball.”

Phrases Similar to On the Ball

Phrases Opposite to On the Ball

Ways People May Say On the Ball Incorrectly

The phrase has nothing to do with balls or ball sports. Using it to describe a basketball or soccer player controlling the ball in a game is incorrect. The phrase describes someone talented, smart, and efficient at what they do.

Acceptable Ways to Phrase On the Ball

The phrase describes a person that’s efficient and talented. So, you’ll use it in situations when you find someone that you can rely on to deliver results. You can use ‘on the ball’ to describe your actions or headspace.