Did a friend text you something surprising? You could reply with ‘JFC’ to express your shock. This post unpacks the meaning and origin of this acronym.

The acronym ‘JFC’ stands for ‘Jesus F**king Christ.’ It’s a vulgar blasphemy used by people outside of the Christian faith or by apostates of the Christian faith. Typically, people who use the term do not attend religious activities or belong to a religious sect. Still, they may have a Christian background in their family history, but that’s not always the case.

‘JFC’ is an exasperated exclamation of frustration said for emotional emphasis. The acronym applies to many informal contexts, particularly digital communications in text messaging and online chats. Some people may use the saying in verbal exchanges, but it’s less common than the online variant.

If someone texts you ‘JFC,’ they are usually angry at something you did. However, it can also voice surprise at something they approve of, depending on the context of the scenario.

“JFC Tim. How did you end up down here at ten at night? Let’s get you back home before something bad happens out here.”

“Oh, JFC. I don’t know how often I have told you about this. Always put the ice in before pouring the gin. It makes a difference to me.”

“I mean, JFC, what was I supposed to do/ He told me to stay put, so I did, and now he’s blaming me for everything that went wrong.”

“Why do I always have to ask you for everything? Why can’t you learn how to be considerate? JFC, I’m tired of you and your lack of respect for others.”

“JFC, that was close. We were about a foot away from the truck plunging into the car in a head-on accident.”

“What’s the problem here? JFC, from all the noise, you would think it’s the end of the world or something.”

“We don’t all have to go there in one car. JFC, gas is expensive, but we’re only going a few blocks, people.”

“Okay, I get you. I’ll make a better effort from now on. But JFC, it’s not like I killed someone or something. I don’t know why you’re being so hard on me.” 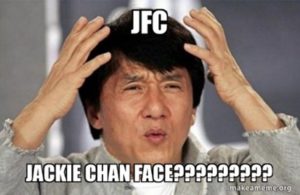 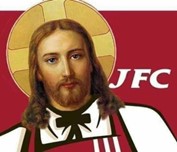 Language experts cannot pinpoint when ‘JFC’ first appears in English as a replacement for ‘Jesus F**king Christ. While the full version of the saying was in use as early as the 1930s and 1940s, the abbreviated term only appeared for the first time in the Urban Dictionary in April 2003.

Language experts believe ‘JFC’ originates from the early 2000s, during a time when cellphone users started abbreviating common sayings and expressions in text messages. Shortening these terms helped save time on typing. Since there were no QWERTY keyboards or predictive text at the time, abbreviations were very popular with users.

Phrases Opposite to JFC

‘JFC’ is an acronym with several variations. The original ‘Jesus F**king Christ’ is a harsh insult to someone of the Christian faith. Saying the full version of the term to a Christian would likely upset them. In text messages, you can use ‘JFC’ in the upper or lower-case. Typically, using the upper-case format adds expletive meaning to its use.

The acronym ‘JFC’ is suitable for online and real-life social interactions. You’ll use the term instead of typing out ‘Jesus F**king Christ’ or one of its variations. The term suits verbal and text communications as a way to avoid blaspheming or typing out the entire phrase.

The phrase only suits social use and not professional communications. You’ll use ‘JFC’ when typing or talking with non-religious people. ‘JFC’ is a ‘blasphemy,’ and religious people may take offense to its use. People use the term ‘JFC’ as a term of surprise or an exclamation of disappointment.