Did a friend just wish you ‘Godspeed’ as you say farewell? This post unpacks the meaning and origin of this expression.

The expression ‘Godspeed’ acts as a farewell greeting to people embarking on a journey. Originally, people would use ‘Godspeed’ to wish someone well before taking a physical or metaphysical journey. If you wish someone ‘Godspeed,’ You’re essentially wishing them good luck and a safe journey.

It’s more common for people to use ‘Godspeed’ when wishing someone well on a long journey. However, in recent decades, the use of the expression changed to a simple farewell greeting suitable for any trip or departure.

“Good luck and Godspeed. It’s dangerous over there in Africa. I’m impressed at how you’re so willing to help others.”

“Thanks for stopping by. It was great to see you again. Let’s catch up on the weekend and have a chat. Until then, Godspeed, my friend.”

“Ok, so you know how to get there now. Godspeed with the trip. Remember to be careful when crossing the pass, as it’s quite dangerous on that section of road.”

“Take care on your vacation. Don’t forget to pack the sunscreen and have a great time in the Bahamas. Godspeed to all of you.”

“Thanks for coming through. We really appreciate it. This was an amazing evening, and it was great to have you both here.; Drive safe on your way home. Godspeed.”

“That’s some trip you have in front of you. I wish I was young enough to travel the world with you, but my old frame can’t take it anymore. Good luck out there, and Godspeed.”

“I wish you good luck and Godspeed, my friend. May you find the answers to the questions you have in life.” 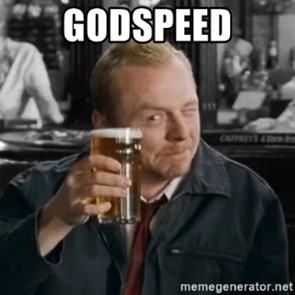 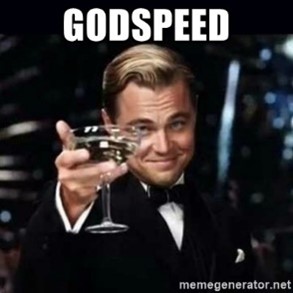 The expression ‘Godspeed’ originates from the Middle English ‘God spede.’ The ‘God’ in the word refers to the religious deity. The ‘spede’ refers to the singular-subjunctive form of “speden,’ meaning ‘to prosper.’

‘Speden’ is a similar word to the Old English ‘spēd,’ meaning ‘success.’ Language experts cannot pinpoint when ‘Godspeed’ was first introduced into the English lexicon. However, some experts believe it comes from the old text ‘Sir Tristrem,’ published circa 1300. The word appears in the text as follows.

“He may bidde god me spede”.

Another possible origin of the word is from ‘A Knights Tale,’ one of the stories in Chaucer’s ‘The Canterbury Tales.’ Chaucer published his work in 1385, where the word appears as follows.

“God spede yow go forth and ley on faste.”

The modern use of the expression appears for the first time in 1526 in the ‘Tyndale Bible.’

“Yf ther come eny vnto you and bringe not this learninge him receave not to housse: neither bid him God spede.”

Shakespeare used it in his 1597 play, ‘Richard II,’ where it appears as follows.

“A brace of draimen bid, God speed him wel.”

Phrases Opposite to Godspeed

Godspeed is not suitable for welcoming people. It’s only a farewell greeting, and the phrase has nothing to do with God or speed. It’s a way of wishing someone luck on their travels and a safe journey.

You can use the term ‘Godspeed’ when saying farewell to someone. You can use Godspeed as a parting gesture to someone you’ll see again soon or someone you might not see for some time. Typically, ‘Godspeed’ suits occasions where you wish someone well on an altruistic journey. For instance, someone is going to work on a vessel for Greenpeace.

The term suits social and professional use. You don’t have to be religious to use ‘Godspeed,’ as it has a secular meaning in everyday conversation. You can use ‘Godspeed’ in text communications, and most people understand it.