Did your entire squadron get taken out while playing “Call of Duty?” If so, you could say that the enemy killed you all in “one fell swoop.” This post unpacks the origin, meaning, and use of this phrase.

The meaning of the idiomatic phrase “one fell swoop” comes from the meaning of the word “swoop.” To “swoop” means to take swift, single action. The word “fell” implies a forceful, ruthless, or cruel intention behind the action.

Language experts are unsure of the origin of this idiom. However, some experts believe it comes from a military strategy where leaders would overcome armies in “one fell swoop.” Considering the archaic language and the use of “fell,” some experts think it could come from Roman times.

The sense of fell retains its original meaning with the modern use of the phrase. The “swoop” in the term typically refers to a strike, blow, or stroke or, in the metaphorical sense of a bird’s sweeping descent from heights.

The “fell” in the phrase comes from the aggressive posture of the swooping action by the bird; As a result, the saying would also experience an alteration to the form, “one foul swoop,” replacing the use of the original “fell” for “foul.” The use of foul in this sense doesn’t refer to “fowl” or poultry; it means underhanded tactics.

“As the platoon approached the kill box, the airstrike team moved in a took them all out in one fell swoop with a carpet bomb.”

“Apple dominated the mobile communications market in one fell swoop with the launch of the iPhone.”

“The court dismissed all charges against the defendant in one fell swoop.”

“The bank took away their home and furniture in one fell swoop after the family defaulted on their mortgage.” 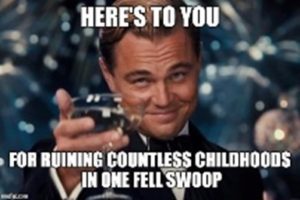 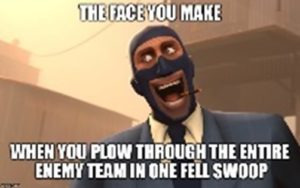 The idiomatic expression “one fell swoop” comes from the Shakespeare play, “Macbeth.” Shakespeare debuted the play in 1605, with the following verse penned in the script.

All my pretty ones?

Did you say all? O hell-kite! All?

What, all my pretty chickens and their dam

At one fell swoop?

Shakespeare uses the phrase to mean swoop in the sense of a bird’s swift descent. However, the expression can have an altered meaning to the word swoop, describing the action of swooping something up.

After introducing the phrase, it did the rounds in English-speaking society. It still has plenty of use in conversation today, and you probably hear it from time to time.

Many video gamers will use the term to describe their performance when facing high-stakes odds. It’s a common phrase, even though its origin goes back nearly four centuries.

Phrases Similar to One Fell Swoop

Phrases Opposite to One Fell Swoop

Some people may use “one fell swoop” to describe a swooping action. However, this idiom describes the motion of completing many tasks simultaneously, and it has little to do with swooping movements. Swooping describes a fast, sweeping action that takes care of tasks as efficiently as possible.

You can use “one fell swoop” in social and professional situations, as well as in online gaming chatrooms and message boards. One fell swoop describes a situation where you take care of many tasks in one go, making for efficient actions. For instance, you could kill the enemy with one fell swoop, or you could close all the deals at your job in one fell swoop.