Did a friend point out a lady on the street and say she has the worst case of ‘RBF’ she’s ever seen? This post unpacks the meaning and origin of this acronym.

The acronym ‘RBF’ stands for ‘Resting Bitch Face.’ RBF describes people’s facial expressions when they are unaware of their appearance. The person will have a grumpy, disgruntled, or frustrated look without feeling those emotions at the time.

Surprisingly, ‘Resting Bitch Face’ is a condition studied by medical professionals. According to psychologists, RBF may occur due to psychological implications of gender stereotypes and facial biases.

Many assume that only women can develop the characteristics of ‘resting bitch face.’ However, a study by scientists using facial recognition technology showed men and women from around the world and from all ethnicities displaying signs of RBF.

If someone has a resting bitch face, they look like someone you don’t want to talk to out of fear of them being depressed or angry. People with RBF may also develop psychological issues with their appearance.

“The math teacher always looks like she’s in a bad mood. My friend told me she has RBF. I don’t know what that means, but I hope it’s not a serious condition.”

“My boyfriend just broke up with me. He says I have the worst case of RBF he’s ever seen. He’s tired of how I look at him and wants to see other people.”

“That woman has an RBF for sure. She always looks like she’s in a bad mood. It’s like she’s waiting for someone to say something so she can yell at them.”

“Your mom has RBF. I hate to tell you that, but you need to know it. Don’t be surprised if everyone seems afraid of her when they come over later.”

“This mean guy I met told me I have RBF. I asked him what that meant, and he told me it’s ‘resting bitch face.’ So, I slapped him.”

“I don’t think there’s any treatment for women that have RBF. I can’t find anything about it online, and the local clinic doesn’t know what I’m talking about.”

“Women with RBF need to start smiling more and enjoying life. How do you expect to find yourself a partner if you always look grumpy?” 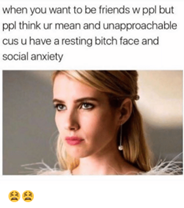 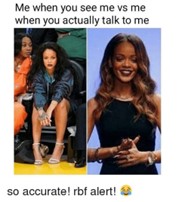 The expression ‘Resting bitch Face’ originates from 2013. However, some think the term may go back to the mid-2000s.

However, the popularity of the phrase spread after the comedy team ‘Broken People’ uploaded a parody video titled ‘Bitchy Resting Face’ on the Funny or Die website. The video showed women and men suffering from the ‘condition,’ with the commentary supplied by comedian Milana Vayntrub.

The expression became a popular internet meme in 2014 and 2015. Many memes use the acronym ‘RBF’ to describe the condition.

Phrases Opposite to RBF

RBF only applies to women with a grumpy or ‘bitchy’ appearance. It doesn’t describe men. Using the term to describe a man is incorrect. The expression describes a woman’s looks, but not her personality. Just because she has RBF doesn’t mean that she feels unhappy or angry. It only refers to appearances.

RBF can refer to women of all ages and all ethnicities. You can use the moniker to describe someone you know or a stranger. However, it’s more common for women to develop RBF in their twenties. You’ll use RBF to explain how a woman looks unappealing because she always looks like she’s in a bad mood, even when she’s happy.