Are you looking to tell someone to have patience with a task or project? You could say, ‘Rome wasn’t built in a day.’ This post unpacks the meaning and origin of this expression.

“Rome wasn’t built in a day, but they worked on it every day. Setting small targets for yourself every night before you go to bed will steer you to achieving your main goal the next day.”

“We’re starting to unwind from all the damage we did to our relationship. Therapy is really helping. We’re not on the same page yet, but Rome wasn’t built in a day.”

“Immediate gratification takes away from the value of earning something. Rome wasn’t built in a day, and working and waiting to position yourself for success is far nobler.” 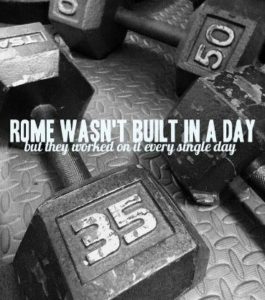 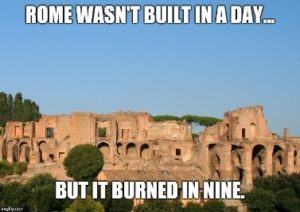 The proverbial expression ‘Rome wasn’t built in a day’ originates from a collection of French poems ‘Li Proverbe au Vilain,’ published in 1190, where it appears as follows.

The first use of the phrase in English comes from the translation of ‘Erasmus’s Prouerbes,’ from Latin, published by Richard Taverner in 1545, where it appears as follows.

‘Ye may use this prouerbe when ye wol signifie that one daye… is not ynoughe for… acheuinge… a great matter… Rome was not buylt in one day.’

‘A Dialogue conteinyng the nomber in effect of all the Prouerbes in the Englishe tongue,’ published by John Heywood in 1564.

“Rome was not bylt on a daie (quoth he) & yet stood Tyll it was fynysht, as some saie, full fayre.”

Queen Elizabeth I included it in a public address in Cambridge in 1564.

“The grief that I feel, and the saying is, that Rome was not built in one day.”

Phrases Similar to Rome wasn’t Built in a Day

Phrases Opposite to Rome wasn’t Built in a Day

The phrase doesn’t mean that you’re intending to build an empire like the mighty city of Rome. Rome fell many centuries ago, and today, most of the ancient buildings lie in ruins. Using it to refer to Roman times is incorrect.

Acceptable Ways to Phrase Rome wasn’t Built in a Day

Use it at work to describe how the biggest companies started from nothing. Use it with friends to explain how building and sculpting your physique at the gym takes time. “Rome wasn’t built in a day’ can refer to building projects, health and fitness, intelligence, and any process that takes time to master.