Did someone tell you their girlfriend deserves the Scarlet Letter? This post unpacks the meaning and origin of this expression.

The expression ‘the Scarlet Letter’ comes from an old story of a woman ostracized by her community for committing adultery and bearing a child from the relationship. She was forced to wear the scarlet letter ‘A’ on her clothing to single her out in the community and keep people from interacting with her.

The modern use of the expression has the same meaning. It describes someone unfaithful to their partner. They may be married or single and in a relationship. It represents a single woman’s promiscuous behavior of sleeping with many men and how other men view her as a ‘whore.’

To say someone has a scarlet letter means that you don’t view them as a viable sexual partner or someone you want to spend your life with. It also refers to someone that you’re afraid to approach because of what people might say about you for doing so.

“Did you hear about John’s wife? She left him for their neighbor. She’s a real scarlet letter, and he deserves someone better than her.”

“The scarlet letter will forever follow you throughout all your days. There is no escaping it, and you must live with the shame all your life.”

“The neighbor’s wife was cheating on him all summer while he was away in Europe. Now he gets back and finds out she’s pregnant. She’s going to get the scarlet letter for sure.” 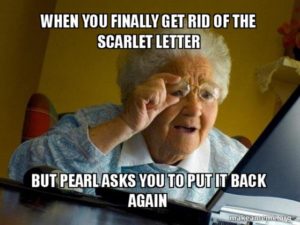 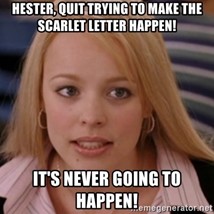 The expression ‘scarlet letter’ originates from the tale ‘The Scarlet Letter,’ Written by Nathaniel Hawthorne. The sorry spins a tale of a woman, Hester Prynne, accused of adultery against her husband and forced to wear the letter ‘A’ in scarlet color on her clothing. Hathorne published his work in 1850, with it being set during the 17th century in the Puritan Colony of Massachusetts-Bay.

It’s a factual account of something that happened to a real person. Hester Prynne was indeed punished for her infidelity and bearing a bastard child. A legal document dated May 13, 1694, outlines the punishment against her.

Phrases Opposite to Scarlet Letter

You can use the ‘scarlet letter’ as a euphemism to describe a woman with promiscuous sexual behavior. She could be married, in a stable relationship, or just a single woman who enjoys sexual freedom. She isn’t afraid to sleep around with men, and she doesn’t care what people think of her reputation. The phrase suits social use in verbal exchanges and text communications.

You’ll use ‘the scarlet letter’ to describe a woman’s infidelity. The phrase refers to her willingly giving herself sexually to someone other than her partner. You could say your ex-girlfriend has the scarlet letter after she cheated on you with someone else.