Are you watching a TikTok of someone saying ‘sheesh!’ while pointing to their inner elbow? This post unpacks the meaning and origin of this expression and viral trend.

The expression ‘sheeesh’ has two meanings. The first is a reactionary statement to something you find surprising, disgusting, or awesome. If you use ‘sheesh,’ it’s similar to saying ‘geez.’

The second meaning of ‘sheeesh’ is a statement of amazement or total agreement with something. It’s a viral video trend on TikTok where people post videos of them admiring something.

Typically, the person will say ‘that’s bussin!’ before saying ‘sheeesh’ with an extended pronunciation. As they say sheeesh, they point to their inner elbow.

“Wow, this shit is bussin! Sheeesh! What do you think of it, my man? Are you as hyped about it as I am?”

“You know, this ride is dope. It’s the coolest car I’ve seen this week. Shoutout to the owner, sheeesh!”

“I went down to the new Nike launch to cop some new kicks. I saw this pair of Jordans, and I was like, wow, this ish is bussin! Sheeesh!”

“Have you heard the new Drake album? Kid, that ish is bussin! Sheeesh! Drake is the biggest talent in hip-hop right now, word.”

“I went for a ride in Kevin’s new Mustang. I was like, man, this ish is bussin! Sheeesh!”

“Really, so that’s how you feel about all of this? Sheesh. If I had known you were doing to be like this, I would never have brought it up.”

“Sheesh, you don’t give people any chances, huh? That’s kind of harsh how you just dealt with him like that.” 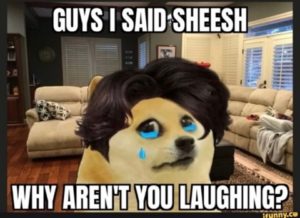 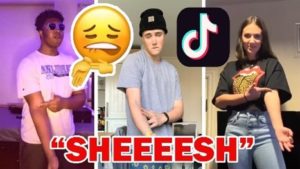 The expression ‘Sheesh!’ has several origins. The original term noted surprise, disgust, or resentment originated in the 20th century. Language experts believe it’s a rendition of the slang ‘Jeez,’ meaning ‘Jesus.” The term was popular and still is today.

However, the viral meme ‘Sheesh!’ originates from the social media platform TikTok. The first video of the meme appeared on the platform in March 2021. User @meetjulio posted his video pouring water on a frog with the soundbite of a high-pitched ‘sheesh’ playing in the background.

The video went viral, with other users posting videos of them doing similar stunts. As the trend grew, people started showing videos of something they found cool, followed by them vicing ‘sheesh!’ and pointing to their inner elbow. The trend was popular from April through to around October of 2021.

Phrases Opposite to Sheeesh

The viral video trend ‘sheeesh’ was popular in 2021 but faded towards the end of the year. While some people still use it, it’s outdated, and using the meme will make you look like you don’t keep up with trends. The normal ‘sheesh’ response to someone telling you something you find alarming, shocking, or amazing is still in use.

You can use the word ‘sheeesh’ in social conversations with friends and random people you meet. It’s a statement of surprise or agreement with someone. For instance, if a friend tells you they got into a car accident, you could reply with sheesh. If they tell you that they’re in trouble for breaking the law, or if they tell you something you find unbelievable, sheesh applies to the conversation.

The viral video mem requires the user to take a video of them saying’ sheeesh,’ but in a high-pitched, prolonged manner while pointing to their inner elbow. While this trend was popular in 20-21, it’s no longer seen very often on social media.