Are you watching the music video ‘Abowwww’ by ShantiiP X TarioP? This post unpacks everything you need to know about the meaning and origin of the term ‘abow.’

The expression ‘abow’ is a Swedish rendition of the English word ‘wow.’ There are some people that point out that the word ‘abow’ also has the same meaning in Arabic.

However, its more common in Swedish slang and conveys amazement or surprise towards an action, someone, or something.

Some language experts believe the term ‘abow’ originates from Turkey, but it’s not the root of the common use of the expression on social media. The Urban Dictionary states ‘abow’ is a slang term meaning ‘wow’ or ‘damn.’

Some suggest that the term ‘abow’ is a motivational statement used to amp people up for an event or hype a speaker.

“Have you seen that ‘abow’ video trend on TikTok? There are some really cool videos on the platform. I’ve been scrolling through them for hours.”

“The ‘abow’ trend on TikTok is great. I love watching those kinds of videos where people get a nice surprise. It makes me feel happy.”

“Abow, it’s just the coolest thing I’ve ever seen. How did you manage to get it to look like that? It’s amazing.”

“I can’t believe you did that to me. We’ve known each other for years, and now you pull this. Abow, just abow.”

“There’s no way I can make it. It’s too steep. Abow, I don’t know how you guys can get up there without falling.”

“It’s an exciting time in our life. Abow, I can’t believe we made it this far. Here’s to us and another successful year on the road.”

“That’s just amazing, my brother. Well done. I’m still in shock. Wait till I tell the parents. They’re going to be like ‘abow.’

“It’s something totally unexpected. I came into the room, and there it was. I was standing there with my mouth open in shock, thing ‘abow’ this is really it.” 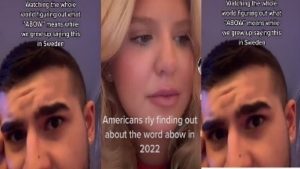 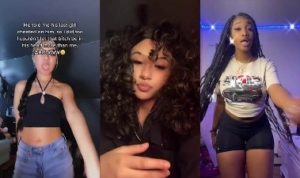 The expression ‘abow’ originates from the social media platform TikTok. It’s the name of several rap songs featuring Tik Tok influencers. The term’s first use in social media culture appeared in a 2020 music video ‘Blow The Whistle,’ by 810Smoke.

810Smoke is affiliated with the production house, LBM, and ‘Blow The Whistle’is the first success for the rapper from Flint, Michigan. The TarioP’s Channel on YouTube uploaded the ‘Blow the Whistle’ track to YouTube in late December 2021, with the clip receiving more than 150k views in less than two weeks.

However, the term ‘abow’ became popular o social media platforms like TikTok after the release of the 2022 track by ShantiiP X TarioP called ‘Throw It Back Abowwww.’

Users on TikTok jumped on a viral video trend, using the expression in videos relating to cool things that occur in their lives.

Phrases Opposite to Abow

‘Abow’ is a social media trend on the TikTok platform. You’ll use it when referring to videos that are shocking or exciting. Users can comment with the word ‘abow’ to express their shock and awe, or they can post videos with ‘abow’ in the tile or the content.

You can use the word ‘abow’ to express amazement, shock, awe, or wonder at something you see online. Typically, you’ll use the term to comment on videos on the social media platform TikTok. While ‘abow’ has Swedish or Arabic roots, it’s now a viral commenting trend on TikTok, with hundreds of videos on the topic.

Most users of the ‘abow’ trend are late Millennials and Gen Zs that use TikTok regularly. The term suits social use, and you won’t use it in professional settings. You can use ‘abow’ as a replacement for expressions like ‘omg,’ ‘wow,’ or ‘amazing.’