Are you watching Hamlet? Do you know the meaning of the saying ‘Alas, poor Yorick?’ This post unpacks the meaning and origin of this iconic expression.

The expression ‘Alas, poor Yorick’ is a way to describe the brevity and fleeting nature of the human experience. It’s a way of understanding your mortality and that sooner or later, we all perish.

‘Alas, poor Yorick,’ can also mean that you reflect on past events or people in your life, reminiscing on your experience with them.

“Everyone is all over this guy, acting like they have pity for him. Well, alas, poor Yorick, you’re in for a nasty surprise when they all turn on you.”

“Alas, poor Yorick, I knew him well. Remember that line from Hamlet? It has to0 be one of the most-quoted lines in English literature.”

“I was hanging out with Tim, and he said ‘alas poor Yorick’ when discussing the death of that comedian. What does he mean? Did he know him well?

“Alas, poor Yorick. I remember that line from Hamlet, and I always use it. It’s a great reminder that we’re all mortal.”

“I watched the movie version of Hamlet the other day. That scene with Hamlet holding Yorick’s skull while saying, ‘Alas, poor Yorick, I knew him well,’ was inspiring.”

“You can replace ‘Yorick’ with any name you want to commemorate when using the phrase ‘Alas, poor Yorick.’

“Alas, poor Yorick, I knew him well. Do you think that phrase applies to all people Hamlet knew, or was Yorick someone special to him?”

“I can’t stand listening to Shakespeare’s stuff. The archaic language just bores me to death. Even ‘Alas, poor Yorick’ doesn’t do anything for me when I read the line.” 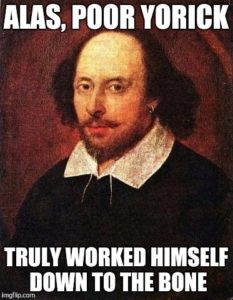 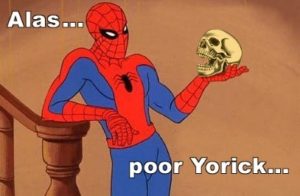 The expression ‘alas, poor Yorick’ originates from the William Shakespeare play ‘Hamlet,’ performed in 1602. Yorick was a jester during his youth and a favorite companion of Hamlet during his formative years.

During the scene where Hamlet is grieving his childhood friend, Hamlet contemplates his mortality with the following line.

“let her paint an inch thick; to this favour she must come”

Hamlet takes his time when thinking back on his life with his friend. He holds Yorick’s skull in his hand, uttering the famous lines found in the scene.

“Alas, poor Yorick! I knew him, Horatio: a fellow of infinite jest, of most excellent fancy: he hath borne me on his back a thousand times; and now, how abhorred in my imagination it is! my gorge rises at it.

Here hung those lips that I have kissed I know not how oft.

Where be your gibes now? your gambols? your songs? your flashes of merriment, that were wont to set the table on a roar?

Not one now, to mock your own grinning? quite chap-fallen?

Now get you to my lady’s chamber, and tell her, let her paint an inch thick, to this favour she must come; make her laugh at that.”

Phrases Opposite to Alas Poor Yorick

Using the phrase ‘alas, poor Yorick’ to describe someone living in a low-income household or poverty is incorrect. The term means that you recognize the fragility of life and the time we have on earth.

You can use the phrase ‘alas poor Yorick,’ I knew him well when referring to the William Shakespeare play, Hamlet. It’s one of the most famous sayings in literature, appearing in everything from movies to TV shows, magazine articles, and more. It’s a way of saying that life is fragile, and you understand your mortality.

Typically, people use it when referring to the downfall of someone in society or when remembering a good friend. It’s common for people to replace the word ‘Yorick’ with someone else’s name to make the phrase relevant to the discussion.