Are you looking for a way to describe our mortality and that no one can escape death? You could use the saying “Valar morghulis” from the popular TV show “Game of Thrones.” This post unpacks the meaning and origin of this expression.

The expression “Valar morghulis” translates from the high Valyrian language to “all men must die.” High Valyrian is a custom language designed for use in the Game of Thrones TV series only. The expression references the mortality of man and that no one can escape death.

In the TV show, it is customary to answer “Valar morghulis” with “Valar dohaeris,” which translates to “all men must serve.” This means that despite us having a mortal life, what men do with their lives separates them from the beasts and leaves their legacy after they die.

“Valar morghulis” can also serve as a warning, reminding people of imminent danger when they are at war or under threat. It’s a reminder to give your all during a fight and not hold back for fear of death.

“While he is no longer with us, we persevere forward. His death serves as a reminder of “Valar morghulis,” that we must all return to ashes at some stage.”

“I know you want to live forever, but so do all kids. You need to understand “Valar morghulis.” It means that we all perish sooner or later.”

“No one is immortal. Valar morghulis, we all shuffle this coil at the end of life.”

“Valar morghulis, he lived his life, now he is gone. However, Valar dohaeris, the man, did not live his life in vain. We will forever remember him for his achievements.”

“To understand the concept of ‘Valar morghulis, one must understand mortality and what it means to die.”

“If you are of mortal ancestry, then Valar morghulis, all men must die. Only the gods can live forever.” 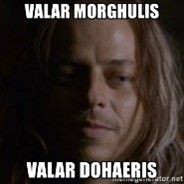 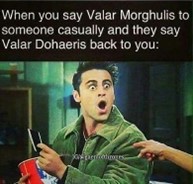 The expression “Valar morghulis” originates from the TV series “Game of Thrones.” The TV show has two specific languages written for it by experts. The languages contain a complete alphabet, vocabulary, and grammar for their use.

The term “Valar morghulis” comes from the High Valyrian language made for the series. Linguist David J. Peterson has experience creating over 50 languages for use in films and TV. Valyrian has approximately 2,000 words in the language.

While high Valyrian is a fictional language in the show, it’s also the title of one of the episodes in the series. The first appearance in writing is on a coin appearing in the episode of the same name.

“Valar morghulis” is similar to the Latin saying “memento mori.”

Phrases Opposite to Valar Morghulis

The expression “Valar morghulis” doesn’t refer to killing all men or a misanthropic view of life. It’s a way to express mortality and that we all live a finite life. Since it’s a niche word in a new language, no one outside of dedicated Game of Thrones fans will understand its meaning.

You can use the phrase “Valar Morghulis” at a funeral or passing off another person to describe every person’s mortality and that we will all die sooner or later. Another person may reply to this statement with “Valar dohaeris,” meaning that the person served their life, and mortality is more than living, but rather, what we do with our lives.

Typically, this language is used online in chatrooms dedicated to discussing Game of Thrones. Or GOT fans could use it between themselves as part of the language created for the series. “Valar Morghulis” is a real word. The writers created two unique languages specifically for the TV show. All the words in the language have a meaning.