Did someone just solicit you on the plane? You could have a chance of joining the “mile high club.” This post unpacks the meaning and origin of this expression.

The “mile-high” part of the expression refers to the plane traveling over a mile above the ground at cruise speeds. The “club” aspect refers to the fact that only an elite group of people have ever had sexual relations on a plane.

“Cindy joined the mile high club with Zack on the trip from John F. Kennedy to LAX. They got away with it; that’s one of the benefits of flying first class, I guess.”

“Hey, John, do you think I should ask that stewardess if she wants to join the mile-high club with me? She’s been giving me a dirty look all the time; I think she wants me.”

“That guy asked me what the mile high club was, and I didn’t get that he was gay. So, I started explaining it to him, and he went for my crotch.”

“The mile-high club isn’t a real thing. I fly all the time, and I’ve never really heard about it ever happening on any flight.” 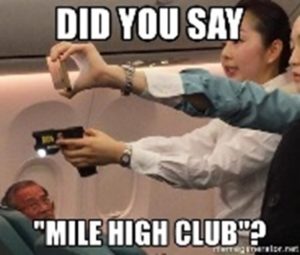 The origin of the saying, the “mile-high club,” comes from the aviation and entertainment industry. The first passenger on board an airplane to gain membership to the club was a man named Lawrence Sperry. Coincidentally, Sperry was also the creator of the autopilot system for commercial airliners in 1914.

While Sperry gets the credit for creating the legacy around the “mile high club,” he wasn’t the first to coin the expression. An article appearing in the “Green’s Dictionary of Slang” shows that the term only entered the mainstream culture as a colloquialism in the 1960s.

As air travel got less expensive and people started using it as a mainstream method of travel, the arrival of the term the “mile high club” spread around in the late 80s and 90s. In Denver, Colorado, USA, an organization founded in the early 20th century named itself the “Mile High Club.”

Phrases Opposite to Mile High Club

Some people might use the phrase to describe having sex in places other than a plane. For instance, the act might be somewhat technically accurate to describe sex acts in a helicopter, but it’s not the correct use of the expression. It also wouldn’t apply to sex acts on land at altitudes of more than one mile above sea level.

You can use the expression “mile high club” when you’re talking to friends about committing sexual acts on a plane. You can use the phrase for commercial flights in any class or private aircraft. The general public would somewhat frown upon the action, but using it as a story to tell your friends would give you a legendary status among your peers in the group.

For instance, if you were a young man and had sexual relations with a stewardess on a plane, the airplane management might not like it and fire the staff member. However, your friends would think you were a legend.