Do you need a way to tell someone you have everything ready to go? This post unpacks the meaning, origin, and use of the phrase “lock, stock, and barrel.”

The expression “lock, stock, and barrel” refers to the three primary components of a rifle. The lock is the firing mechanism, the stock is the handle, and the bullet travels through the barrel.

So, the phrase’s meaning is that you have all the components of the plan on hand and ready to go. You are not missing anything, and you have everything required to complete the task.

“The Democrats have run this state for a long time — lock, stock, and barrel. That has to stop.” – Kudlow, The Hartford Courant.

“He’s still asking for more, and his Republican uncles are clearly ready to turn over to him whatever’s left of the family savings, lock, stock, and barrel.” – The Huffington Post.

“If the RSS has its way, it would shut the university down, lock stock and barrel and throw the keys into the Bay of Bengal.” – The Deccan Chronicle.

“We have everything ready to go, lock, stock, and barrel.”

“We gave him everything, lock, stock, and barrel.” 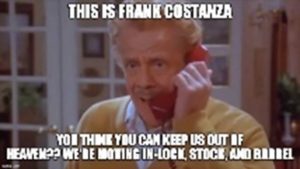 The origin of the term “lock, stock, and barrel” comes from the US military. The phrase’s first use appears in July 1803 in a newspaper, “The Connecticut Sentinel.”

The publication featured a column reporting on the 4th of July festivities in Stratford, Connecticut. It appears as follows.

2nd: Jefferson, Paine, Gallatin, and all the rest…

Sir Walter Scott was the first to use it in a letter in 1817, where he writes the following.

“Like the High-landman’s gun, she wants stock, lock, and barrel to put her into repair.”

Most people credit Scott with coining the phrase even though it was in use before his time. The English filmmaker, Guy Ritchie, would use a variation of the expression, “lock, stock, and two smoking barrels,” as the title of his debut feature film.

Phrases Opposite to Lock Stock and Barrel

Some people may use the phrase to describe all the gun components. While this is the origin of the expression and the true meaning of it, it has little application outside of the gun community or the military.

Typically, when people use this phrase outside of these two gun markets, they use it to describe something else’s components. Since the wider use of the expression has nothing to do with guns, it differentiates from the original but retains a similar meaning.

“Lock, stock, and barrel” means that you have all the plan’s components. It’s a confirming statement to other people to let them know that you have everything under control. It gives them confidence that they can trust you.