Are your friends asking you to watch this hilarious “honkwiching” video, and you have no idea what they are talking about? Honkwiching is a subculture getting some traction in 2020 and 2021, and it’s not something that you see on the internet every day.

Honkwiching is a silly and amusing trend. This post unpacks everything you need to know about honkwiching. We’ll look at the origin and meaning of this idiom and how you can use it in a conversation.

Honkwiching is a strange term, and you probably don’t hear it around very often. In fact, you’re probably here looking up the answer to what it means because you’re tired of hearing it around and not knowing what people are talking about when they use it. That’s okay; it’s a somewhat niche and confusing term.

Some videos of honkwiching feature multiple musicians taking part in the honkwiching, and others have a single musician launching their sandwich at a crowd waiting underneath them. Some of the videos have some hilarious results, but it has nothing to do with serious music.

Most of the videos feature young high school and college musicians completing the honkwiching challenge.

Kim: “Hey honey, what are you doing?”

Kim: “What on earth is honkwiching, and why do you find it appealing?”

Kim: “What has society come to when this is what we do for entertainment?” 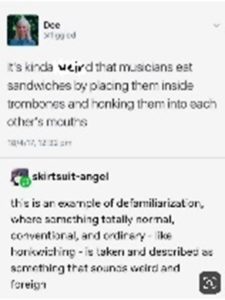 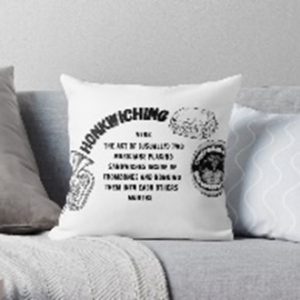 No one knows the exact origin of the idiom, “Honkwiching.” The term appeared on the internet featuring high school and college musicians, so we assume it came out of American higher education culture.

Reddit has a subreddit dedicated to the “past time” of honkwiching. You’ll find plenty of posts on the practice and many memes showing you honkwiching and honkwiching videos. There are also several tweets about honkwiching, with a small niche group of users responding to the replies in the threads.

Most of the people who are replying to the thread are young, and they are not professional musicians. Therefore, we assume that honkwiching is just a college or high school stunt to get more views on social media. We doubt that any real trombone players are messing around with honkwiching videos.

The first use of the term in memes started appearing in 2016. The Urban Dictionary would go on to define the term in 2017.

Some people may refer to honkwiching without knowing what it is. If you’re not using a musical instrument and sandwiches, then chances are you’re probably doing something else. The phrase doesn’t have anything to do with honking the horn on a car.

Honkwiching is a unique term, and it’s only the subject of memes on the internet and stories on message boards. To say that there is a whole movement behind honkwiching is overkill. Most people won’t have an idea of what you’re talking about if you start mentioning that you were watching videos about honkwiching. For the people who find honkwiching appealing, entire sub-reddits are devoted to the niche.