Are you watching a viral video of someone drinking a wocky slush on TikTok? What is this drink, and where can you get some? This post unpacks the meaning and origin of this expression.

The term ‘wocky slush’ refers to a drink containing a slushie mixed with cough syrup. The opiate-based cough syrup drink is the slushie version of ‘lean’ or ‘drank,’ a popular drug in the hip-hop community.

Wocky slush is a viral video trend on TikTok, with users showing videos of them making wocky slush at home or out on the town. The drink looks like a slushy, with a light purple color to it. As a result, people online started posting the character Squilliam from Spongebob Squarepants to represent the meme.

“Yo, let’s head to the store and get some slushie for this lean. I feel like a wocky slush tonight, boy. Oh yeah! Let’s get all messed up!”

“Wocky slush is a disturbing trend on TikTok. Kids are seeing it and thinking it’s cool. That means more of them will develop opiate-based cough syrup addictions.”

“I used to think the wocky slush was the bomb. But then I almost died on it the one might. I tried to get off it, and it’s harder than I thought. I keep relapsing.”

“The wocky slush is amazing. You feel good drinking it, and it’s way better than alcohol. But you have to be careful, or it will kill you, straight up.”

“Wocky slush looks cool. I want to try that this weekend. Do you think the dealer will be able to get us a bottle of cough syrup? I heard it’s hella expensive.” 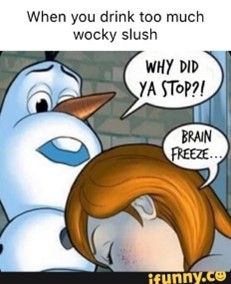 The origin of the term ‘wocky slush’ comes from a viral video trend on social media platforms., TikTok. TikTok user juvenilextc posted a video on December 1st, 2020, showing off a drink he created. A friend yells ‘wocky slush’ in the background during the recording, and the name stuck.

The video has over 250,000 likes, inspiring hundreds of parody videos over the following days. YouTubers compared the guy shouting ‘wocky slush’ in the background to the ‘Squilliam Fancyson’ character from Spongebob Squarepants’ animated TV show.

On December 2nd, 2020, Miilo2 posted a video to his YouTube account featuring Squilliam saying the phrase. The video garnered over 18,000 views on the first day.

Phrases Opposite to Wocky Slush

It’s a viral trend on TikTok, often featuring the animated character ‘Squilliam’ from the Spongebob Squarepants series. You can use it with friends when describing the drink or in online text messages, on forums, and on message boards, like 4Chan and Reddit.