Are you wondering what the government can do to stop school shootings? Most parent shudder at the thought of their kids being ‘unalived at school.’ This post unpacks the meaning and origin of this expression.

The expression ‘unalived at school’ refers to children dying at the hands of a gunman in a school shooting. Typical, it’s referring to the school shooting in the United States involving teens and semi-automatic or automatic weapons, like the AR15.

Unalived at school has become one of the many slogans adopted by the left in their quest for tighter gun control legislation.

The phrase refers to parents discussing problems with the American public school system and how schools are targets for mentally ill psychopaths that want to make a statement in the media.

“Now that I live in the EU, I don’t have to worry about my kids being unalived at school. There are no mass school shootings in this country, but they do allow the citizens to bear arms.”

“I keep an AR15 in my car, and if I hear about a shooter at my daughter’s school, I’m going in. I don’t care what the cops say.”

“Trump supporters are claiming the Uvalde shooting is an example of how immigration is out of control in America, and it’s affecting American values and society as a whole.”

“The Uvalde shooting is an example of how it’s not safe to send your kids to a public school anymore. I don’t want to drop my kids off every morning wondering if they’ll be unalived at school.” 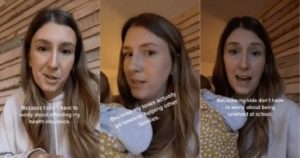 The expression ‘unalived at school’ comes from a 2021 TikTok video with an American ex-pat mom living in Germany. At the time of the post, she had resided in Germany for the last two years, and she lists twelve reasons why she’s glad she doesn’t live in America anymore.

Aly (@usa.mom.in.germany) replied to a video post by @v.brtinney. The clip shows Aly sharing her list of reasons, with one of them relating to no longer fearing her children being part of a school shooting.

“Because my kids don’t have to worry about being unalived at school. And because my taxes actually go towards helping other families.”

Aly’s video has close to 2 million views, and most comments applaud her for moving to Germany to escape her old life in America.

Phrases Similar to Unalived at School

Phrases Opposite to Unalived at School

The phrase ‘unalived at school’ doesn’t refer to teen suicide at high school or teenage students having depressed feelings or thoughts of suicide. It relates to children being killed during school shooting incidents.

You can use the phrase ‘unalived at school’ to describe school shootings. It’s a phrase coined by an American ex-pat living in Germany, referencing how she doesn’t have to worry about school shootings since moving to the EU.

The phrase suits social use when discussing the societal impact of school and mass shootings and how it affects child safety at school venues across the United States. You can use the expression as a defensive statement to show your motivation for schooling your children at home or with private tutors, citing safety as a concern in the US public school system.