Are you looking for a way to say that you’re doing an easy task and have an unfair advantage? If so, you could say it’s “like shooting fish in a barrel” to describe how easy it is for you. This post unpacks the origin and meaning of this expression.

The expression “like shooting fish in a barrel” means that you’re doing an easy task where you have an advantage. You find the job easy, beating the competition without breaking a sweat, or no competition is present, making it easy for you.

“The manager gave me this stack of leads, and I’m closing every seven out of ten. It’s like shooting a barrel, and everyone is taking the timeshare.”

“It was too easy pitching those people at the convention. I had them eating out of my hand. When I told them to go to the back to buy my course, they were tripping over each other. I tell you, it was like shooting fish in a barrel.”

“That level was no problem. All those guys were amateurs. It’s no wonder we cleared them out so fast. It was like shooting fish in a barrel.”

“We walked around the convention taking the details of all the people interested in joining our team. It was like shooting fish in a barrel. Everyone wanted in.”

“Picking up girls at those events is so easy. It’s like shooting fish in a barrel.” 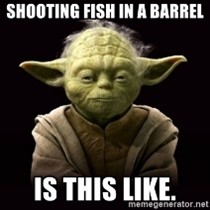 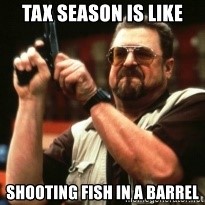 The origin of the expression “like shooting fish in a barrel” remains a mystery to language experts. No one can pinpoint when the phrase started to be used in language or when it appeared first in print. It’s a somewhat modern saying, so some experts believe it originates from the early 1800s.

Some believe the saying goes back to the mercantile days of fishmongers selling their fish at open-air fish markets on the East Coast of the United States. Merchants would pack the fish tightly into barrels and fill them with ice to preserve the fish for as long as possible.

If a person were to shoot the barrel, they were likely to hit a fish. The earliest mention of the expression in print comes from the Bunbury Herald newspaper in 1912, where it appears as follows.

“Up to this time it had all been easy as shooting fish in a barrel; but after a while No. 9 would come pounding down from Huntington, and then I knew there would be several kinds of things to pay.”

Phrases Similar to Like Shooting Fish in a Barrel

Phrases Opposite to Like Shooting Fish in a Barrel

Ways People May Say Like Shooting Fish in a Barrel Incorrectly

The phrase has nothing to do with fish or the actions of shooting guns. In this instance, the “shooting” is the action you’re taking, and the “fish” are the people on the other side of your good fortune. The barrel means that you have the “fish” trapped in a system or area where they can’t escape, and they must comfort you to their detriment.

Acceptable Ways to Phrase Like Shooting Fish in a Barrel

You can use the saying “like shooting fish in a barrel when you’re expressing how easy a task is for you to complete. It also suits situations where you’re trying to tell someone you have an unfair advantage that’s paying off in your favor at the expense of others.

The phrase suits professional and social use. You can say it at the office when you’re telling someone that you’re finding it easy to close a bunch of high-quality leads. When you’re with friends, you could use it to describe making money off a string of good hands at the poker table.