Are you about to reach your breaking point in a conversation? Maybe you’re looking for a way to tell someone that you’re tired of taking their toxic behavior toward you?

You could use “the last straw” to tell them that you will not bear any more of their words or actions. This post unpacks this expression’s meaning and origin.

The “last straw” is the tipping or inflection point in a series of events leading to the moment. The “straw” can refer to many things in life. It could be a person’s boastful conversation about themselves being more than you can bear to hear.

Or it could refer to giving your kids warnings for running around the house and then using it when they don’t listen to your instructions.

Typically, the phrase has a negative connotation and describes a bad action or series of events. It also serves as a veiled threat to get the other party to stop their behavior.

“Okay, kids, I warned you about running around the house. Breaking the vase was the last straw; now you’re grounded for the weekend.”

“The manager has been getting under my skin lately. He’s intentionally trying to get me to react by treating me unfairly. One of these days, it’s going to be the last straw, and I’m going to let him have it.”

“That’s the last straw, my friend. Now I’m reporting you to the police. You can’t do that and expect to get away with it.”

“Carol’s behavior tonight was the last straw. I don’t think we have any option but to send her to boarding school to learn some self-discipline.” 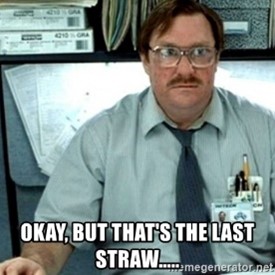 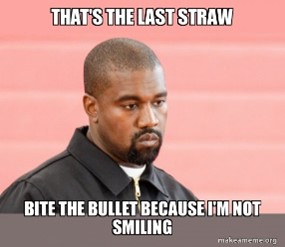 The origin of the expression “the last straw” comes from the longer version, “The last straw that breaks the camel’s back.” The shorter version is now more common in language, and you probably hear it a lot more often than the full version.

The earliest use of the phrase appears in the mid-19th century. The Australian newspaper, the Age, published the expression in an 1854 article where it reads as follows.

“It was to be remembered that it was the last straw that broke the camel’s back, and the Colony ought to do nothing to diminish its credit in the London markets, where it was already so low that nobody would come forward and lend them a shilling.”

Charles Dickens, the legendary author, used a similar rendition a few years earlier in his work, “Dombey and Son,” published in 1848.

“As the last straw breaks the laden camel’s back, this piece of underground information crushed the sinking spirits of Mr. Dombey.”

Phrases Similar to The Last Straw

Phrases Opposite to The Last Straw

You use “the last straw” to tell people that you are about to react or retaliate to their behavior or words toward you. Using it to describe the last straw at a convenience store as an excuse for anger would be incorrect.

You can use the phrase “the last straw” when you’re telling someone that you are reaching your breaking point, and you will react to the stress of the situation. It’s a threat that means people that you are no longer willing to entertain their conversation, viewpoints, ideologies, or behavior.