Are you looking for a way to say you suspect foul play in a situation? If so, you could use “I smell something fishy” to voice your concern. This post unpacks the meaning and origin of this expression.

The expression “I smell something fishy” means that you suspect foul play in a situation. The situation can range in severity, from questioning a colleague about stealing from the petty cash at the office to wondering why your dog is always sneaking behind the shed.

The saying implies that you’re aware of someone or something’s suspicious activity, and it might be worth investigating it. It can also refer to situations that don’t feel right, and there is no specific person to blame for the uneasy feeling.

The phrase can also mean that you suspect someone of withholding the truth or acting in bad faith in an attempt to avoid blame or collaboration with another party. I smell something fishy can mean that you detect someone being dishonest or coy in their conversation with you, and you think it’s worth digging deeper.

“Something’s fishy about that guy. He’s always in the backroom on his lunch break, and the manager told me the stock count was down from the previous week.”

“Something’s fishy about these readings. If it was increased solar activity, we would see it on the charts, but there is no correlation of the event.”

“Somethings fishy with Mike’s behavior. He’s been going to work the night shift the last week, but he comes home smelling of perfume.”

“There’s something fishy with this report card, son. It looks like you altered it with white-out to change your grade.”

“There’s something fishy with Brenda wanting to come over to visit right after she broke up with Matt. I don’t trust this girl, and I’m not going to do anything stupid with her.”

“Something smells fishy with this situation. The backup was supposed to be here five minutes ago, and all the radios just went dead.” 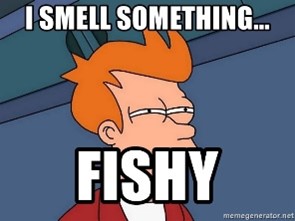 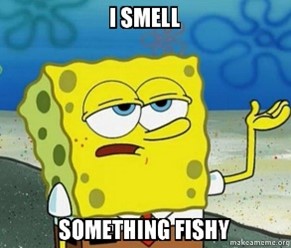 The expression “I smell something fishy” originates from the early 1800s. At the time, many people bought fish from street vendors at the local market. Fresh fish smelled very different from old fish, and the rotting smell gave away the fact that vendors were trying to offload old stock.

The phrase then became a consumer staple when visiting the fish market. It spread through other categories of fresh goods as a way to signal to others that the vendor’s produce or goods were old and rotting. Unfortunately, there is no written record of the first use of the phrase in English.

Phrases Similar to I Smell Something Fishy

Phrases Opposite to I Smell Something Fishy

Ways People May Say I Smell Something Fishy Incorrectly

Most people use this phrase to comment on suspicious activity. Using it to describe something that smells bad is incorrect. The saying has nothing to do with detecting bad odors. However, there is a subsect of memes on Redditt and 4-Chan using the expression with a vulgar meaning relating to the smell of female genitalia.

Acceptable Ways to Phrase I Smell Something Fishy

You can use the phrase “I smell something fishy” when you’re trying to tell someone that you suspect foul play. It’s a way of saying that you suspect someone of doing something illegal, deceitful, or deceptive. The phrase suits social and professional use.

You can use it at work if you suspect a colleague is stealing out of the petty cash drawer. OR you could use it at home to describe strange behavior in your son where he’s spending more time alone in his room.